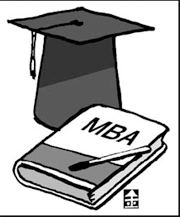 “Cold call” is a fearful term among incumbent students from the MBA programs of prestigious Ivy League universities in the eastern United States. The word originally was marketing terminology referring to sales using unsolicited phone calls or visits by salespeople. However, it became jargon that indicated mercilessly difficult questions from professors during lectures. The lecture hall became a battleground because students were always afraid of receiving hard questions. Students wrestle with around 500 management cases over two years with the purpose of becoming a great entrepreneur warrior in the global business battleground.
Two years have passed since some Korean universities, including Seoul National University, began receiving government support to create Korean MBA programs. Much attention is being paid to the work performance and employment of Korean MBA program graduates who have just finished their studies. All who dreamed of better workplaces and incomes are not smiling without exception, even though they joined the MBA programs and spent tens of millions of won per year. Now that MBA programs have an unusual sensibility to trends and business fluctuations, MBA diplomas are prohibitively expensive or serve as symbols of highly-educated unemployed people. In addition, controversies over the quality of the mushrooming MBA programs ― such as the “Don’t Ask MBA” or “Quasi MBA” ― are growing ceaselessly.
What sets the Korean MBAs apart from other master’s of business administration programs is that they provide an academic forum where a variety of pragmatic studies are intermingled and offer a window of opportunities for students to develop their own decision-making capabilities. The success or failure of Korean MBA programs depends on how quickly people’s thinking can be turned around.
The programs should focus more on how many big conglomerates ― such as Samsung, Hyundai, and LG ― will be used as examples if they want to gain an international reputation. If blue-eyed white students are panicking in lecture halls after receiving cold calls, such as “How can more Korean discount shops make inroads in overseas markets?”, then it is a lecture room in a successful MBA program. Kwak Su-Keun, dean of the College of Business Administration at Seoul National University, forecast a gloomy future for the Korean MBA programs, saying, “The Shanghai MBA programs in China with a shorter history of business administration are being flooded with American and European businesspeople.”