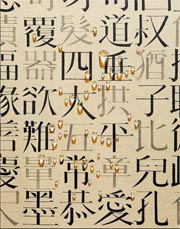 “Recurrence” by Kim Tschang-yeul. Provided by the gallery

In many ways the opening exhibition at the new location of the Park Ryu Sook Gallery poses an interesting outlook onto the local art world.
It serves as a retrospective of modern Korean artists who incorporate Korean sentiments into their Western-style works.
Geographically, the show marks its position as an established commercial gallery.
The gallery, which is in one of the city’s most expensive areas, has put together some of the most successful modern Korean artists.
There are 17 artists in the current show, including high-profile names like Kim Tschang-Yeul, Paik Nam-June and Lee Ufan.
The Korean artists featured in the show resonate in many other ways.
Except Huh Dal-je, known for traditional ink paintings on mulberry paper, most artists in the exhibit followed Western art traditions and practices.
They nourished commercial success, and consequently made it to overseas markets.
One of the highlights in the show is Chun Kwang-Young’s “Assemblage,” a wooden panel of sculpture made up of small Styrofoam triangles wrapped in mulberry paper and tied together with string. “Untitled” by Lee Ufan is another biggie, an installation constructed out of a huge rock and placed on square metal panels.
Lee’s work concerns the artist’s understanding about our internal state and the relationships between objects and space.
There are notable paintings, which typify Korean modern art. “Recurrence” by Kim Tschang-yeul shows the artist’s famous series of water drops, a visual metaphor for meditative discipline.
“Ecriture” by Park Seo-bo, considered one of the foremost contemporary Korean artists from the 1960s, conveys the artist’s attempt “to draw, paint, describe and depict” using a unique technique dating back to a Korean literati ink painting.
Huh Dal-jae, the eldest son of famous traditional Korean painter Heo Baek-ryeon, presents alluring Korean ink painting, which incorporates modern techniques by dipping rice paper in black tea to give the mulberry paper its deep color.