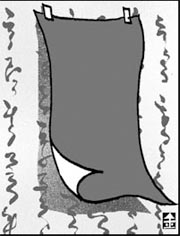 One of the things that people in both the East and the West have in common is the fact that they cover their furniture with cloth to protect it from turning dusty. Westerners often use white cloth to cover furniture and other equipment, as you can sometimes see in movies. The Chinese favor green silk for that purpose. The homes of wealthy families and powerful bureaucrats use green silk to protect their furniture. One of the four classics in Chinese literature, “Honglumong,” or the “Dream at a Red Pavilion,” also records a song that reads “at which little window does the green silk land now?” The green silk should have been called blue silk to be more accurate. A bloke named Wang Fa in the Tang Dynasty era became an orphan when he was young and begged meals at a Buddhist temple. A fellow like him, with no relatives but a mouth begging for food, was surely not one of the monks’ favorites, either.
One day, several monks ― not likely ones who vowed to serve as ascetics ― cooked up a plan. They planned to eat the meal only by themselves, then ring the gong after it was finished. They ate quickly, then rang the bell. Poor Wang had waited a long time and was starving. He rushed to the canteen immediately after the bell, only to find it empty. He could taste the bitterness of hunger.
Twenty years later, Wang Fa, who was a poor but brilliant kid, reached a powerful post. At a very timely point, he was appointed provincial head of what is now Jiangsu, where that memorable temple was located. Nostalgic, Wang visited the temple. He found that green silk had been placed on a poem he carved in a corner of the temple during a time when he had been inconspicuous.
Obviously, it was a move to appease the man who had become a big shot. Wang must have found it rather funny that even a temple had to transform when power changed hands. Wang Fa left a poem saying, “After 20 years of dust, the wall now wears green silk.” The words became a way to mock people hungry for power.
Everybody swallows something sweet, but quickly spits out something bitter. Nonetheless, if the change is too quick, it can be an object of gossiping. In the same way, the broadcasting networks changed completely after the presidential election. Before the election, everyone on those networks shouted endlessly about the BBK scandal and then-candidate Lee Myung-bak. Now that Lee has won the election, they are doing way more than covering the wall with green silk. You should consider seriously whether those broadcasting companies, which swing so wildly with a shift in power, should be further favored as a form of media.