A gritty throwback to gangster classics

A gritty throwback to gangster classics 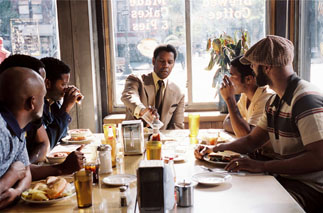 All of us remember our first time watching “The Godfather” films (well, at least the first two).
It’s a truly eye-opening cinematic rite of passage, and the movies only get better as the years go by. So sitting amidst the latest torture-fests and action sequels, it can be easy to lose faith that such a feat could ever be equaled.
In a Hollywood that makes remakes “Miami Vice,” and where even Scorsese himself stumbles (“The Departed” was not nearly as electrifying as it should have been), can there ever be another crime film that attracts, disgusts, hypnotizes and titillates like Coppola’s masterpiece?
With “American Gangster,” director Ridley Scott and writer Steven Zaillian answer: Hell yeah.
Denzel Washington plays Frank Lucas, a real-life figure and the most notorious New York drug lord of 1970s New York. His inspiration is Ellsworth “Bumpy” Johnson; Lucas’s innovation: to buy heroin direct from the source in Southeast Asia and sell at a lower price and a higher purity than anyone else (smuggled in coffins of soldiers who died in Vietnam).
In a little twist for the American consumer, Zaillian and Scott change the setting of Johnson’s death, which actually happened in a restaurant, to a Harlem electronics store boasting “new Japanese models.” The irony that Americans would begin directly importing their electronics and their drugs is not lost.
Zaillian (“Schindler’s List”) is no stranger to New York crime films after providing Scorsese the script for “Gangs of New York.” But Gangster is immeasurably tighter in plotting than that behemoth, and even more focused than The Godfather, with its spotlight on a single man. And some man.
The film oozes masculinity in a way that’s harder to get away with today, but Washington projects intelligence, patience, unwavering power and most of all a cold, rational mind, in a way that many actors called upon to play crime lords miss (Marlon Brando, of course, not among them).
The entire film is a vehicle for this driven ego, and naturally the image of a successful black man taking his world back is a powerful one.
The first thing Lucas does with his newfound wealth is buy his mother an enormous manor in North Carolina and bring his family into the business. Lucas wins a home, a trophy wife (Lymari Nadal) and new lives for his family. And he’s modest to a fault, even to the point of throwing a new fur coat onto a fire, angry that he had been so audacious as to wear it. But there’s never any mistake about whose suffering Lucas’s success is built upon.
With a deadpan expression, Lucas executes a rival on the street for homing in on his territory. And shots of junkies ruining their lives and the ugly public housing projects that Lucas helped infest with drugs remind us this is in fact a very bad man.
That’s where New Jersey detective Richie Roberts (Russell Crowe) comes in. In many ways he’s the impotent yin to Lucas’s yang. A wreck with a failing marriage, shunned on the force because he refuses to take bribes, Roberts is picked to lead the narcotics task force that eventually singles Lucas out as the key drug kingpin.
Lucas, as a black man who has come up from the bottom to dominate the established white mafia families, is an outcast, while Roberts is himself a pariah.
They share many similarities even though they face each other over an impassable moral divide, and that generates much of the film’s friction.
Surrounded by corrupt cops and with no technical jurisdiction in New York City itself, Roberts must schedule his stakeouts carefully and play his many enemies against each other.
It’s a tense thrill to watch, and the final shootout isn’t just exciting, it’s also tragic. Scott recreates in minuscule detail the vertical slums that urban planners erected in the 1970s, and the suffering and despair of the era are palpable.
With nuanced performances, masterful scripting and shooting and a heavy dose of machismo, American Gangster rightly takes its place as a new masterwork of American crime cinema.
A movie like this just doesn’t come often enough.