Forgo the casinos for a nose around the churches

Forgo the casinos for a nose around the churches 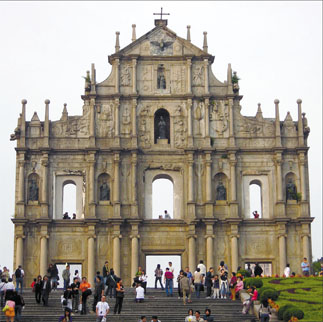 Portuguese pavement and architecture make Senado square in central Macao look straight out of Europe; the facade of the ruins of the Cathedral of St. Paul

If there’s a lesson I learned on my trip to Macao last month, it’s to avoid the casinos and plan ahead, especially when booking a return ferry.
As a 22-year-old, like most people my age, I did not plan ahead. And this is precisely how I ended up stranded for four hours in the Macao ferry terminal, which has no seats. And how I ended up eating a dinner of beef soup with noodles ― which included a human hair and a pig nose.
And while that soup sent me running to the bathroom, which was unfortunately lacking toilet paper, I can truthfully say I had a good trip.
But I could have made it better by planning ahead.
When I headed to Hong Kong last month, I knew a day trip to Macao was in order. After all, the ferry trip only costs HK$322 ($41).
“Macao!” my friends said when they heard. “Have fun at the casinos!” To many, Macao is synonymous to gambling. No wonder, as gambling has funneled vast amounts of money into Macao. Last year, the gambling revenue there, at about $6 billion, eclipsed that of Las Vegas.
So despite my lack of experience, I was excited to head off to the new gambling capital of the world. So excited, in fact, that I forgot my passport in my hotel in Hong Kong ―which you most definitely need to board a ferry for Macao. Luckily, the next ferry with available seats left a good 45 minutes later, giving me ample time to taxi back to the hotel.
When I stepped off the ferry, finally in Macao, I imagined glitz and luxury like I’d never seen before. Although I’d never been to Vegas, my friends’ stories included donning expensive cocktail gowns, dancing until their feet could no longer bear their stiletto heels and drinking overpriced cocktails while rubbing elbows with high-rollers. And Macao was supposed to be better than Vegas, right?
Like true young nomads, all my travel buddy and I had was the free map from the ground floor of the ferry terminal and roughly five pages of information in our Lonely Planet mini guide.

A crowded Macanese street near the city’s center reveals a side of the city free from casinos; The gaudy exterior of the Casino Lisboa, which became one of the most famous casinos in Macao after being built in the late 1960s. All photos by Hannah Bae

Thus, wandering aimlessly seemed the modus operandum. First stop was the gleaming gold Sands Casino, the biggest in the world by the number of gaming tables.
We were promptly kicked out.
“Members only!” the bellboys said, shooing us away.
The funny thing was, there was no one ― member or nonmember ― around the Sands, or really anywhere else nearby for that matter.
Macao, it seemed, was little more than a creepy ghost town with a bunch of scary, monolithic casino resorts, most of which weren’t even open for business yet.
My friend and I shuffled dejectedly toward the waterfront. At least there we could take pictures of the Kun Iam goddess statue. A representation of the Buddhist goddess of mercy, the Kun Iam statue rises up from a dome in the shape of a lotus flower planted along the waterfront. Quietly serene in her flowing garments of brass, poor Kun Iam had no other visitors while we snapped photos. She seemed to watch over little more than the noisy construction site of the future MGM Grand.
Wandering along, we stumbled across the Wynn Macau. I’d heard of the luxurious Wynn Las Vegas in an episode of “The Fabulous Life,” the trashy VH1 television program that catalogues celebrities’ opulence in sickening detail.
But first we had to get around the construction surrounding the casino and hotel. Steel bars and plywood covered the walkways adjacent to Tiffany’s and Louis Vuitton boutiques, and we had to hop several brackish puddles to even reach the front of the hotel, which was identical to photos of its Las Vegas counterpart with its graceful, sloping curve.
I was a bit worried about venturing inside after the Sands. Plus, my friend and I were both in casual sundresses. But you only live once, we figured, so in we went. 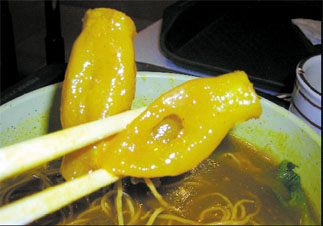 In the Macao ferry terminal, a pig nose surfaces in a bowl of what was supposed to be beef soup with noodles.

Turns out we needn’t have worried. The other gamblers were wearing shorts, Hawaiian shirts and outfits that appeared to be straight from a thrift store. Most shocking was the bathroom: Despite the exquisite black marble sinks with their sleek angular basins and motion sensor faucets, the bathroom was in complete disarray. The trash can overflowed with used paper towels and nearly all of the toilets were unusable with urine-spattered seats or feces-filled bowls.
Disgusted, my friend and I had had enough of the casinos. With the aid of our free tourist map, we headed down a crowded, narrow street.
As the street opened into the central city square, I was amazed. With balconies, cobblestones and porticos, it was as if I’d stepped into Europe, only filled with Asian people. Unlike the casino-heavy part of town, this area bustled with people filling cafes, street markets and shops. Despite the crowds, central Macao appeared, like Europe, to move at a slower pace.
For nearly four centuries, Macao was a Portuguese colony. It was only in 1999 that Macao was handed back to China and established as a Special Administrative Region, the same classification as Hong Kong. Portugal’s long-time influence shows in the mix of cultures, evinced especially in religion.
With a large Catholic influence, Macao is home to several impressive Catholic churches that currently stand in varying states.
Although classified as ruins, the Cathedral of St. Paul is the most impressive. Its huge gray facade features numerous relief carvings, such as that of the Virgin Mary and saints.
Buttressed against concrete supports, the front stands tall, with stairs around back that allow tourists to climb up to the windows that overlook the streets below.
But the view, along with the scenic skyline of burgeoning casinos, also reveals a more destitute side of Macao. The backs of buildings were stained with mold and water and showed unsightly air-conditioning units and laundry. The apparent disparity in wealth between the casino resorts and the regular dwellings of the Macanese seems almost criminal.
But the even greater shame seemed to be the wealth of gorgeous churches with no one to appreciate them.
In nearby St. Anthony’s Church, considered to be Macao’s oldest, the elderly caretaker was thrilled to have visitors. Aside from us, the church lay empty. Rows of pink candles at the altar burned in prayer for the absent.
At St. Dominic’s Church, we found an extensive museum of ecclesiastical art. Here, floor upon creaky floor led to what Lonely Planet called an “embarrassment” of religious paraphernalia truly worthy of the museum’s name: The Treasure of Sacred Art. 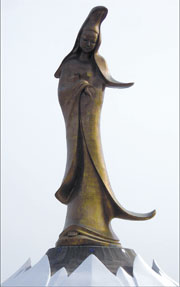 The Kun Iam statue on the waterfront of Macao provides quiet serenity among the glaring casino lights.

Statuettes of Mary clad in gossamer wore tarnished golden crowns atop their heads of what may or may not be human hair with curls intact. Rows of rosaries and chalices lay on display, preserved in all their intricate glory. Morbid fascination took hold when I viewed a statue of the dead Christ lying prostrate in a display case that eerily resembled a glass coffin. As a Protestant, statues of holy figures, especially that of bloody Christ, come across as creepy to me, yet fascinating.
But even more eerie than these relics was the feeling that my friend and I were treading within a crypt completely void of other visitors.
After a day redeemed by touring lovingly preserved churches, my friend and I hopped a free shuttle back to the ferry terminal. There we began our interminable wait.
Spreading out plastic bags, we camped like hobos in the warm night air. Although we could laugh at ourselves, I doubt that wealthy gamblers would have been as good-natured.
But ah, such is the beauty of being young, poor but happy.


For prompt ferry service between Hong Kong and Macao, visit www.turbojet.com.
Ferries depart every 15 minutes between 7 a.m. and 11:59 p.m. Weekday tickets range from HK$142 ($18) for economy class to HK$1,416 for a VIP cabin. Prices start from HK$154 on weekends and holidays and from HK$176 for night service, which begins at 5:15 p.m.
Booking in advance is strongly recommended.
For information on cultural exploration in Macao, visit www.olamacauguide.com.
There are no flights between Korea and Macau International Airport. Korean Air, Asiana and Cathay Pacific fly from Seoul/Incheon to nearby Hong Kong International Airport.