Of mice and men

Of mice and men 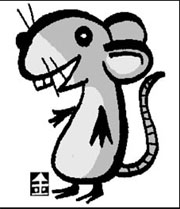 After so many peaks and valleys, the year of the pig is about to go and the year of the rat is coming in. The year of the pig had plenty of stories, including a baby boom by couples wanting to have a child in the auspicious year of the golden pig.
There are five rat years out of the 60 appellations. Like the golden pig, the name for next year is the wild rat, which dwells in the fields or mountainsides. More specifically, it represents a type of rat that feeds on vegetables or on grain, as well as insects in the woods. It is also known to be easy to tame. Similarly, people who were born in the year of the wild rat are known to be sensitive yet patient, thrifty and diligent. A dream in which a rat turns into another animal or in which a herd of rats eat provisions stored in a pantry may indicate a great fortune.
Views about rats tend to change through time. At least until the 1960s, all rats had to be eradicated because they stole grain and carried disease. The rat made frequent appearances in popular sarcasm as well. A person, back then, might have been called as worthless as a rat.
However, young people these days seem to enjoy having rodents more specifically hamsters and pander mice, as pets.
Their generation grew up with the popular cartoons Mickey Mouse and Tom and Jerry.
One zoo in Korea plans to run a “mouse village.” It will include a hamster named “Hope,” squirrels, guinea pigs and so forth. This seems to symbolize the sweet hopes that ordinary people have for the coming year of the wild rat.
The previous years of the wild rat saw more than a few historic events, which planted seeds of hope for a new age.
More recently, in the year of the wild rat in 1948, the Republic of Korea was established amid the division of the Korean Peninsula. The question now is whether the 2008 year of the wild rat will bring about another new foundation.
Everyone is busy talking about the coterie of President-elect Lee Myung-bak and what policies they will bring about. So far, people between the ages of 40 and 50 with international experience have been recruited.
The next five years are a crucial turning point for Korea, which will leap forward and become an advanced country having been completed industrialization and democratization. Inter-Korean relations are likely to take a historical turn during the period. We look forward to the keenness of Mickey Mouse, Jerry and their like spirits for challenge in the coming year.