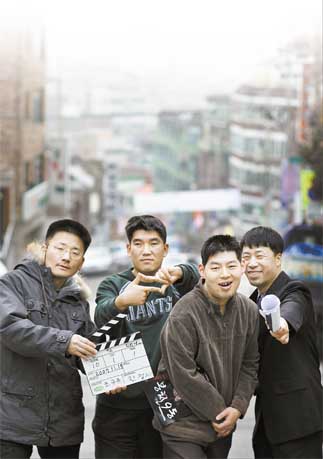 It’s a long day of hard work at the car wash, but Shin Min-chul doesn’t grumble or complain.
Yes, he may have a drink to drown the pain of being single at his age.
Though Shin is 34, he isn’t involved in a relationship.
Most of what he thinks about while washing cars is the hope of getting married someday.
He’s not alone.
Shin is mentally disabled ― referring to those with an I.Q. of 70 or below ― and so are his friends at work.
Most of the time they talk about women.
Jin-hyuk, Shin’s friend, confesses that he has a date and Man-sik, another friend, says he is marrying a foreign bride.
Shin’s church set him up on a blind date once, but it turned out to be a disaster.
Discouraged, Shin went to a matrimonial agency but he was disappointed once again.
Shin plays the central character in the 50-minute film, “Bongcheon-9 Area.”
The character’s sorrowful experience has its foundation in real life.
In the film, Shin accidentally bumps into a former female friend and they start dating, though he faces many social difficulties because he is mentally challenged. 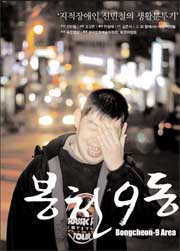 Shin Min-chul is the main character in the film “Bongcheon-9 Area.” Provided by Living Together

“We want to manage our own family but it’s hard,” Shin says.
“The scene where the main character is frustrated and embarrassed after his blind date is not a made-up story ― it’s exactly what happened to me.”
Bongcheon-9 Area is a film directed, shot, produced and starred in by 30 mentally challenged members of Living Together in One World, a center for the disabled.
The center is located in Bongcheon-dong, Gwanak, in southeastern Seoul.
The film was organized by Purn Productions and is supported by the Arts Council Korea and the Prime Minister’s Lottery Commission.
Filming began three months ago with the goal of trying to correct the somewhat distorted view that the public has toward the disabled.
Shooting took place mostly near City Hall, Seoul Anglican Cathedral and cafes in Ilsan, Seocho-dong and Insa-dong.
The average age of the film participants is over 30, and in real life they struggle with hardships the characters face in the movie.
The search for love is a big source of frustration for them.
“When brainstorming for ideas, a majority of members suggested they write about how they are rejected for marriage,” said Seo Sung-min, the managing director of Living Together.
The main staff of the film ― director Cho Gyu-jun, 35, cameraman Han Jung-je, 30 and producer Kim Chun-sik, 41 ― are all single.
“People may not imagine the mentally-disabled getting married, but actually, love is their utmost concern,” Seo said. That frustration is expressed in the movie.
Three scenarios written by Cho, Kim and Shin were compiled in a 30-page script. Being only mildly mentally disabled, they were able to communicate without a hitch, though it was slow going.
It took them six months to prepare for filming.
Under director Cho’s control, producer Kim hit the clapperboard before each scene.
Slowly he shouted, “Take number 3, ready and action.”
Cameraman Han, with trembling hands, cautiously turned the camera toward Shin, who was told to act gloomy.
But Cho continually yelled, “Cut!” In the end, there were 10 takes until the final cut was made.
“The script called for melancholy acting but Shin kept smiling,” Seo said.
Repetition and practice was the only way the team finished the job.
Han constantly pressed the camera button to become familiar with the tools of the trade. Producer Kim memorized three buzzwords ― “Scene,” “Cut” and “Take.” It took Cho 15 days to shout “Action!” at the right moment.
The whole production required patience.
“Producing the film itself was educational,” Seo said.
Actually, it isn’t the first time that the members worked as a production team.
Last year, they produced a real-life documentary called “The World Seen through the Camera” that depicted their daily lives at the car wash and at the post office.
The production company had training sessions to educate them on the fundamentals of using a camera, writing a scene and acting.
That was when Han first began working with cameras.
A staff member from Purn Productions who asked to remain anonymous, said: “Now, Han handles the camera on his own. Through training, he developed his talent and created his own filming style.”
Choi Gong-youl, the chief director of the International Association of Culture Exchange for the Disabled, agrees.
Though he didn’t take part in making the film, Choi says art allows the mentally challenged to discover their hidden talent.
The association has been organizing culture activities for the disabled, including museum visits, watching performances at the Sejong Performing Arts Center and holding educational seminars.
“To elevate their mental knowledge, we hold training sessions twice each year,” Choi said.
But Choi said the local support culture established for the disabled is still fragile.
“There weren’t many cultural benefits for the disabled until two or three years ago,” Choi said.
Now, public awareness is growing more and people are becoming more concerned with their rights.
Choi suggested that society create more job opportunities for the disabled so they can develop their hidden talent and interact with others more easily.
Little by little, organizations and people are showing more concern.
To make Bongcheon-9 Area, the Arts Council Korea provided 11 million won ($11,715) to Purn Productions.
The press screening was held last Thursday at Joongang Cinema in Jongno-gu.
Said Han: “Through the character of Shin, I wanted to deliver what we think and how we live.”
Kim, the producer, said, “At first, there were many conflicts, especially with the director. But he bought me bungeoppang [fish-shaped pastry filled with sweet red bean paste], which paid off an old score.”
Said Cho: “Seeing that the film has been completed, my heart is full.”
The film isn’t commercial ― it isn’t going to be on any box-office lists.
But Seo hopes to screen the film at festivals.
“Education is the main purpose of this film,” Seo said. “Then comes change on how people recognize the mentally ill.”
The staff at Living Together hope that people who see the film will be educated and develop more tolerance and empathy for the mentally disabled, ultimately leading to better social conditions.
During the press screening Shin wore a large smile.
“Shin has the best smile among Korean actors,” Cho said.
The friendships forged during the filming project have been a blessing.
The team hopes to produce another form of artwork in the future ― either a love story or a music video.