The Suwon Fortress was built by King Jeongjo,

SUWON, Gyeonggi ― King Jeongjo was a monarch of many unfulfilled ambitions. His dream was to make his Joseon kingdom a place where everyone was treated equally regardless of where they were born in the social order. The idea, however, was too radical for the 18th century, and he died without accomplishing his goals at the turn of the century in 1800. He was 49.
Authorized history books define the cause of his death as complications related to a skin disease, but the true cause is still a mystery. Some theories say that the king’s opponents poisoned him.
His ideas for freeing slaves and increasing equality for entering government ended up being flowers that withered before they blossomed. However, one of his realized ambitions was the construction of a fortress which is still standing and the city of Suwon, now about a one-hour subway ride from central Seoul. Called the Suwon Hwaseong Fortress, this structure gained worldwide recognition when it was designated a World Cultural Heritage by Unesco in 1997. The fortress embraces the city with almost six kilometers of castle walls and some 40 buildings, including small palaces for temporary stays by royal families.
Historian Kim Jun-hyuk notes that Korea is a “land of fortresses,” as the peninsula had long been a target of foreign invasions. An age-old Korean war strategy has been to “empty the field and attack from the fortress,” Kim said. With this in mind, some 350 fortresses were built during the Joseon Dynasty, especially after disgraceful defeats in the Manchu War in 1636 and in the Japanese invasion of 1592. Once they were in place, fortresses also started to serve as the peninsula’s administrative centers, explained Kim, who specializes in the King Jeongjo period and the Suwon fortress. Among the hundreds that were built during the Joseon Dynasty (1392 to 1910), Kim has a special interest in the Suwon Fortress, and he is not alone.
Take Suwon native and taxi driver Yoo Jae-nam for example. The fortress today is surrounded by modern buildings, bus stops and motels, but it is still a source of pride for Suwon’s citizens.
“The fortress used to be my playground when I was a child, and it is now a big money-maker for me since many visitors take my taxi to visit it,” Yoo said last Wednesday.
The fortress comes more to life when one hears stories about King Jeongjo, who planned Suwon as a place where he would spread his wings and realize his ambitions. More personally, it would be a place to lay the body of his father, Crown Prince Sado, who met a tragic death.
King Jeongjo’s grandfather, King Yeongjo, had locked his son, the crown prince, into a wooden rice bin until he died, a period of several weeks. It is believed that King Yeongjo, who had a reputation as a much respected, strong leader, succumbed to political pressure in his decision to punish his son. King Jeongjo long cherished the dream of soothing his father’s spirit, and once he gained the throne, he moved his father’s grave to Suwon.
But why did it have to be Suwon? Kim explained that King Jeongjo chose the city after mulling over suggestions made by scholars in books. They chose the place as a “key point of strategic importance to protect the capital.” Suwon sits southwest of Seoul, and it has historically been a key stop for traffic moving from the country’s south to the capital, Kim noted. King Jeongjo was planning to relocate to Suwon after achieving his reform goals, together with his mother, who was called Hyegyeonggung Hong. 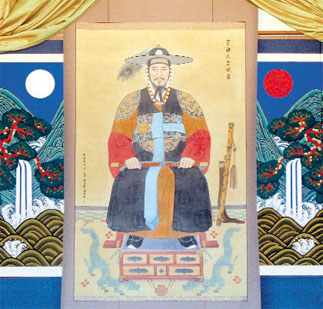 Who wanted to make his 18th century kingdom a better place for common people. [JoongAng Ilbo]

Evidence of the King’s filial devotion is the 1795 event that he held in honor of his mother’s 60th birthday, a landmark year that used to be highly celebrated. To celebrate, the king planned a grand royal parade from his palaces in Seoul to Suwon.
The event is remembered as one of the biggest royal events in Korean history. Some 6,000 royal family members, guards and soldiers participated in the parade, which is now re-enacted every October in Suwon.
After the sudden death of the king, however, the fortress and the temporary palaces met a tragic fate, especially in the 20th century after Joseon was colonized by Japan in 1910. Guides like Park Ho-mun, who provides English-language tours of the fortress, explained that the Japanese colonial government aimed to destroy the fortress as a way to “erase the Korean spirit of resistance.” Parts of the fortress and palaces were destroyed and turned into houses or schools.
The forced occupation ended in 1945, but it was only in the 1980s that some of Suwon’s residents began restoring the fortress. Kim Dong-hui, who turned 90 this year, is one of them.
Kim, a doctor of obstetrics, has a vivid, sad memory of having to witness the destruction of the fortress by the Japanese colonial government. Kim’s son, Kim Hyung-koo, spoke for his father, who was too old to be interviewed. The younger Kim recalled that his father and like-minded citizens offered to help the mayor and the government restore the fortress. “My father, like most Suwon citizens, took huge pride in the city, and it was only natural for us to pursue the revival of the fortress, the heart of the city’s spirit,” Kim said.
Another Kim, the historian, gratefully welcomed the fortress’s revival because he considers its architectural beauty to be of the highest level.
Thus, the revival project was launched and is almost finished after years of repairs. To this day, parts of the fortress are still dotted with cranes and construction workers putting on the final touches, but it is almost back to its original form, historians note.
In recent years, the fortress and its palaces have become favorite places for filming historical dramas like “Daejanggeum,” the phenomenally successful show about a court lady who was a cook and then a doctor, on MBC-TV.
“King and the Clown,” a box office hit that sold more than 10 million tickets, was also filmed there. This explains why a group of Japanese tourists were visiting last week.
The fortress offers audio tours in Korean, English, Japanese and Chinese for 2,000 won ($2.1), and trained guides speak Korean, English and Japanese.
Using the audio tour makes a big difference to the visit because without the stories that go along with it, the fortress may look like nothing but bricks, rocks and some old buildings. 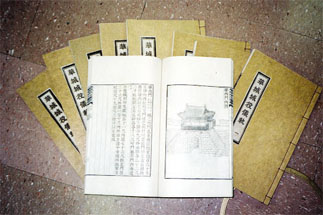 A book that the king published that contains records from the construction process. By Chun Su-jin

When it comes to appreciating the fortress’s architectural beauty, advance knowledge is almost a must. Kim, the historian, noted that King Jeongjo paid keen attention to pragmatism in architecture. Planning the fortress as the “zenith of modern Joseon architecture,” Kim took special note that the king drew from the strengths of both Chinese and Japanese architecture and used it for the good of the country.
When it came to laying bricks, Kim pointed out that about a third of the wall is made of bricks set at right angles in the Korean style. The rest were laid at a slant, in the Japanese style, which made the structure more solid.
The king also sought advice from reform-minded scholars like Jeong Yak-yong, who proposed using the first modern-style crane to build the fortress. Other scholars called for the use of finely produced bricks, which would strengthen the structure’s walls.
The effort that went into the building makes Kim the historian even sadder about the King’s unfulfilled dreams.
“If only King Jeongjo could have achieved his ambitions, many things would have changed for the better,” Kim noted.
Although King Jeongjo’s ambitions for a classless society may not have been realized, people can still saunter around the fortress he built and remember his dreams.

It takes about one and a half hours to take a walk around the palace. For a tour of the entire fortress, there’s a special train that goes around its walls. For more information, call (031) 251-4435. To get to the fortress from Seoul, take subway line No. 1 to Suwon Station.