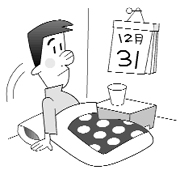 “Shibahama” is considered a masterpiece of the Japanese traditional comedy form, rakugo.
There is a reason why this piece, which describes the faith and love between a married couple, is always presented on Dec. 31. It is because the main scene takes place that evening.
The hero Masaru works in a shabby fish store, drinking away his days. Dreaming of making a big fortune in one fell swoop, he is not very interested in routine business.
Early one morning, he heads toward the fish market in Shiba, Tokyo, still not sober but pressured by his wife.
While strolling along the Shibahama shore near the market, he comes across a wallet containing a lot of money. Filled with excitement, he starts drinking with his friends. But when it comes time to pay the bill, he finds that the wallet has disappeared.
His wife scolds the bewildered husband, saying, “You only dreamed that you found a wallet.” After this incident, he reflects on his past and cleans up. He stops drinking and becomes the owner of a decent fish store in three years.
It was on Dec. 31 that the husband, Masaru, dropped his head in front of his wife and started shedding tears. It was out of gratefulness to his wife that he let go of his wild dreams and started sober living.
That is when his wife confesses, “Actually, it was not a dream that you found the wallet.” The wife knew that if her husband spent the money, he would probably get robbed, so she reported the wallet as a lost item to the government.
After her confession, the wife hands him the wallet that he had found. In three years no one had claimed the wallet, so the government handed the wallet and the money over to the wife.
Then the wife offers a drink to her husband for forgiving her, saying, “Just this once.” Masaru, who is about to drink, suddenly puts down the glass, saying, “I should stop. I don’t want it to become a dream again.”
Today is Dec. 31. People dream and add wings to their imagination, although sometimes their ideas are criticized as wild fantasies.
When dreams are far from reality, the scale of dream becomes bigger and one feels happier. Nevertheless, the dream eventually comes to an end.
In 2008, let’s all keep our eyes wide open and not let wild fantasies prevail in our real lives. However, I hope everyone has nice, exciting dreams tonight, since it is the first dream of the year.