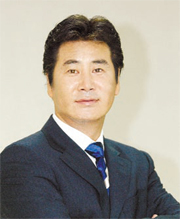 Sometimes in life you just have to admit your wrong-doings ― even if you are a big star. Last Saturday, veteran actor Yoo Dong-geun, 51, publicly apologized for assaulting two members of staff on the SBS TV drama “The King and I,” a story about a loyal eunuch during the Joseon Dynasty. He said he was trying to support his wife, Jeon In-hwa, 42, who stars in the drama as King Seongjong’s mother.
Yoo was enraged because the scripts were turned in late, which exhausted Jeon. He visited the set and had a bust-up with two of the producers, Kim Yong-woo, who took four weeks to recover, and Lee Chang-woo, whose jaw was hurt.
Yoo went into hiding after the incident. Kim and Lee, supported by the SBS Producers’ Association and Producer Journal demanded that Yoo apologize and admit responsibility.
It took Yoo two weeks to apologize officially. He visited the set and offered a bow to Kim Young-seon, the vice chairman of a joint labor union for Korean stations. “Yoo said that he had been concerned about his wife but that he regrets his actions,” Kim said.
“All matters have been resolved, but the union wants to know the circumstances that led to the assault,” Kim added.
Jeon resumed acting last Friday after a short break following the incident.
By Lee Eun-joo