Take your dancing feet down to ‘42nd Street’

Take your dancing feet down to ‘42nd Street’ 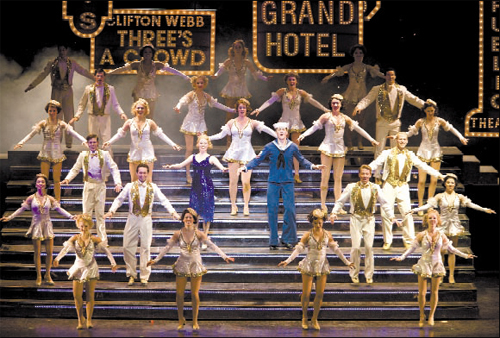 The cast of the latest “42nd Street” production stars performers from the Broadway revival in New York. Provided by triPRO

What better way to kick off the new year than with a tip-tap tapping hoofathon of a musical, particularly when the show is performed by some of the hottest singers and dancers straight from New York.
The hit musical “42nd Street,” which opens at the National Theater of Korea this Saturday and runs until Feb. 28, is being staged for the first time here by the stars of the recent Broadway production.
42nd Street was first performed in Korea in 1996 and since then there have been numerous performances.
What’s different about this show is that performers in the past were all Korean; this 2008 show includes the New York cast.
42nd Street is one of the most decorated musicals ever to tread the boards. It won the Tony Award for Best Musical in 1981 and Best Revival of a Musical in the 2001 Tony Awards.
triPRO, the production company behind the musical, promises an exciting staging, extravagant costumes and all-around entertainment.
Special effects include a massive mirror that reflects the action on a rotating stage.
The musical is an adaptation of a 1933 film of the same name. 42nd Street refers to the major crosstown street in Manhattan known for its theaters and its proximity to Times Square. The story follows the life of a struggling out-of-town actor, Peggy Sawyer, during the Great Depression in the U.S. during the 1930s.
After setbacks at auditions, Peggy gets a big break when the lead in a fictional musical, “Pretty Lady,” breaks her ankle. Peggy takes over at the 11th hour and is catapulted to fame.
42nd Street won’t be limited to just a Seoul run. From March 4 through March 9 it transfers to the Daejeon Culture and Arts Center. It will be staged at the Busan Cultural Center for ten nights starting March 13. Tickets range from 130,000 won ($138) for VIP seats to 40,000 won at the lowest.
The Valentine’s Day package costs 260,000 won and includes a bottle of wine. Seats on Feb. 6 and Feb. 8 cost 20 percent less and there’ll be no performances on Feb. 7, the day of the Lunar New Year. For more information, call (02) 742-9005.