Vet battles to save wildlife in Taean oil spill

Vet battles to save wildlife in Taean oil spill 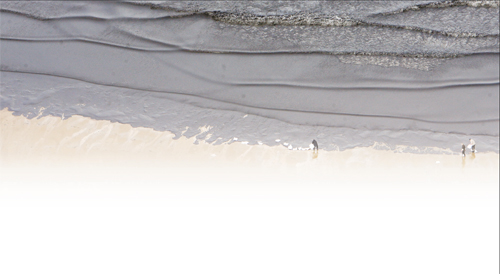 SEOSAN, South Chungcheong ― When he was young, Kim Sin-hwan believed he could cure the world if he saved the country from the military regime.
Instead, he now cures injured birds.
Kim is a veterinarian who specializes in treating endangered birds.
When he first moved to this small town in South Chungcheong with his wife back in 1988, there was little need for a vet who loved rescuing birds. He spent more time watching birds than treating them.
His favorite time of year is the migration season in winter when he drives down to Cheonsuman Bay and photographs the birds.
The bay is a major transit route for migratory birds heading to their breeding grounds in Siberia. Up to 400,000 pass through the bay, including black-faced spoonbills, wild geese, swans, ducks and white cheeks. Thousands of birdwatchers flock here every year.
Until the fateful oil spill in Taean in December, Kim made a living helping farmers deliver calves on local diary farms. 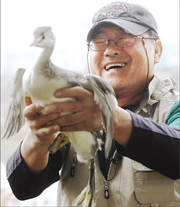 Veterinarian Kim Sin-hwan has treated birds contaminated in the recent oil slick that has affected parts of the western coastline of the Korean Peninsula. By Jeong Chi-ho

But since last month, Kim’s life has been turned upside down. He now spends more time looking at dead birds than live ones.
After a barge slammed into a Hong Kong-registered oil tanker carrying 260,000 tons of crude oil last month, leaking 10,500 tons into the Yellow Sea, Kim’s been tending to many injured birds.
They’re delivered to his clinic in old cardboard boxes, completely covered in oil. Kim’s clinic in Seosan, about half an hour from Manripo, the hardest hit beach, is the closest place for treating birds.
“In the past we’ve had a few poisoned eagles and different kinds of birds affected by minor oil spills from ferries docked near the ports,” he says, “but I’ve never seen anything this bad before.”
A total of 56 birds were rescued from the recent spill, according to the Korea National Park Service. Only 26 survived. But the Association for Wild Bird Protection, another watchdog for the country’s wild birds, predicts that the actual damage could be 10 times worse.
“The tide washed many of the birds to shore,” says Yun Seung-nyeong, a representative of the Association for Wild Bird Protection. “But we’re talking about thousands of birds that were already out to sea at the time of the spill. If you include those birds, the damage to the ecosystem in the west sea could be catastrophic.” 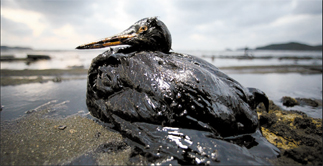 The great crested grebe that Kim found a day after the spill, but which he couldn’t save. [JoongAng Ilbo]

And it’s not just birds. Other animals have suffered as well. Just a few days ago, a local fisherman found a porpoise washed up dead on Taean’s shoreline.
Oil had clogged up its lungs and it had suffocated, an autopsy revealed.
Kim majored in veterinary medicine, but he spent more time attending political rallies during the 1980s. He led the farmers’ movement, which was sponsored by the YMCA, in Hongseong, a town in South Chungcheong.
One day, disillusioned with the political situation, Kim moved to Seosan to start afresh. He set up a small clinic, treating birds and livestock.
“He’d run down to our farm in the middle of the night whenever our calves were sick,” says Lim Seong-gyu, a taxi driver who used to own livestock.
“He’s a good man. He saved a lot of animals and birds. The people around here are very fond of him,” he says.
On a recent afternoon, a coal goose from Taean was brought to Kim’s clinic coated in oil. The contamination was serious, and the goose barely ate.
It excreted oil throughout the afternoon.
Kim spent the afternoon brushing oil from the bird’s feathers using dishwashing detergent and warm water. But the feathers were still tinted dark brown.
A drop of oil the size of a dime is enough to kill a bird, Kim says, and he wasn’t sure the goose would make it.
He closed the lid on the cardboard box so the bird wouldn’t get disturbed. To prevent hypothermia, the main cause of death for birds caught in an oil slick, he blew a hair dryer through a small hole in the side of the box.
Before he went to bed, Kim slipped a piece of smelt, a type of fish, inside the box.
The next morning, the fish had been eaten. Kim fed the goose more smelt, and later that day the bird’s temperature returned to normal.
But these successes have been tinged with distress for Kim.
Sadly, while Kim was treating the goose, his 19-year old dog died in his home.
“Ever since the spill, I’ve been smoking two packs of cigarettes,” he says. “A day a bird dies, I smoke three.”
The Korea Federation for Environmental Movement, a local group involved in rescuing birds from the oil spill in Taean, has found 35 birds along the area’s coastlines, including the coal goose.

“Sinduri,” a great crested grebe, is released at a reservoir in Seosan, South Chungcheong, after nearly three weeks in Kim Sin-hwan’s clinic. By Jeong Chi-ho

Ten died, and the rest, including seagulls, have been released into the wild.
Kim, the sole vet involved in the rescue through the Korea Federation for Environmental Movement, is now in great demand. Last week, he was surrounded by a group of reporters and TV camera crews at a reservoir near the area’s landfill.
It was the day “Sinduri,” a crested grebe Kim found near Samok Port in the first week of the spill, was due to be set free after three weeks in intensive care.
The grebe was named after one of the hardest-hit beaches. That was where Kim came across the first bird, another great crested grebe, after the oil spill.
It was still alive when he found it, and he watched over the poor creature for hours, helpless to intervene. Reluctantly, he left it on the beach, thinking it would die.
When he went back to look for the bird the next day, it was gone. “I named the crested grebe Sinduri, because I was so upset I didn’t take it back to my clinic,” he says.
It was Kim’s way of honoring the dying bird. It also symbolizes Taean’s hopes of recovery.
Before Sinduri was released, a sensor was attached to its right leg to enable environmentalists to track the bird.
Kim watched the bird take a few tentative steps into the reservoir before it flapped its wings and took off. Through his binoculars, he watched the grebe fly out of sight.
“I cried really hard after leaving the grebe on the beach at the start of the rescue operation,” he says. Releasing Sinduri was an act of catharsis. “I feel better now,” he said on the drive back to the clinic.
Choi Ye-Yong, a planning director for the Citizen’s Institute for Environmental Studies who works closely with the vet, says Kim was vital to the rescue.
“He showed how an individual can make a huge difference,” he says.
“He’s an old vet from a countryside clinic. I don’t think anyone has ever been more serious about their job. I’m glad people finally recognize what he has done for wildlife rescue in this community,” Choi adds.
But it might take another decade before Kim drives down to photograph birds in the bay again, if environmentalists are right that it could take that long for the area to recover.
This is a delicate ecosystem and no-one can be sure if the numbers of migrating birds that visit this coastline will rise or fall.
The problem is delay, Kim says. If the clean-up operation suffers any serious setbacks, he reckons Taean will take a generation to recover.
But even after the physical mess has been cleaned up, the emotional trauma of witnessing the disaster could take time to dissipate.
“When my father died, many people came to his funeral,” he says. “But on my way back home, I was left with my own family. The residents of Taean will have to face the same situation months from now. They’ll be left on their own.
“I hope they’re strong enough to endure the loneliness.”