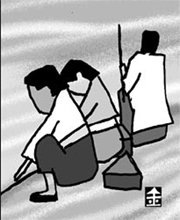 In 1937, an art broker in the Netherlands surprised the world with an important revelation. He claimed to have discovered “The Disciples at Emmaus,” an unpublished painting by Jan Vermeer. The news turned the art world upside down. The art broker who brought the painting to the limelight was Han van Meergeren. Through 1942, he announced the discovery of six more Vermeer paintings. However, in May 1945, Meegeren was arrested for war crimes as Nazi troops left the Dutch soil they had occupied since 1940. The most serious accusation against him was that he sold “Christ with the Adulteress” to Hermann Goering, a top Nazi. But in 1947, Meegeren exclaimed in court, “I painted it.” In fact, he said, he drew all of the paintings that he sold. Few could believe it, so Meegeren asked for oil paints and some time. Indeed, he painted an original Vermeer work impeccably. With that last forgery, he convinced the judge. Meegeren was sentenced to two years in jail for forgery, a relatively minor penalty for a war crime. Meegeren, however, died in prison due to a heart attack.
The Meegeren case speaks powerfully about how difficult it is to determine the authenticity of a piece of art.
The more skill a forger has, the more reliant we become on scientific methods to verify authenticity. For instance, through an ultraviolet fluorescence analysis, just with the tiniest sample of pigments, the composition of the oil used to solvent and pigments can be detected. Forensic authentication also detects the oxidation level of the paper or canvas. Take, for example, the forgeries of works by Lee Jung-sup, which were confirmed by prosecutors in October of last year. They were able to determine that the forgers cut and used old material based on different degrees of oxidation.
Debate over the authenticity of one of the Park Soo-geun paintings has intensified. The authentication of that painting received a lot of attention because the piece was sold for a record-high price in a domestic art auction, 4.5 billion won ($4.8 million). There is no way critics alone can agree on the authenticity of a piece.
Use this as an opportunity to conduct a forensic authentication. A simple X-ray fluorescence can determine when the white paint on a frame was painted. If you sample a tiny bit of pigment from underneath the frame, you can also conduct ultraviolet fluorescence and infrared analysis.
I hope the unpublicized painting of Korea’s talented and much-loved painter, Park Soo-geun, will prove that his masterpiece is indeed authentic.