Hugs all around as Kaesong throws open its doors to tourists

Hugs all around as Kaesong throws open its doors to tourists 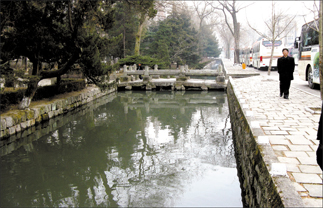 KAESONG, North Korea ― This may sound strange, but I feel at home in North Korea. After all, despite the yawning political gulf that separates our two countries, Kaesong is just a 90-minute ride from Seoul.
Last week I was among a convoy of some 350 tourists ― predominantly South Korean, though any passport holder can take this tour ― heading north with Hyundai Asan, the only company running trips to Kaesong.
The tours were launched on Dec. 5, nine years after Hyundai Asan started its Mount Kumgang tours.
The Kaesong tour has been under discussion ever since the Kaesong Industrial Complex opened here in 2000.
One of my fellow travelers was Lee Ok-in, 81, born and raised in Kaesong, but who headed South before the Korean War ended in a stalemate in 1953. “I couldn’t sleep for many nights when I thought about my homeland,” said Lee, waiting in line at the immigration checkpoint.
Her son said, “My mother has told me so many stories about Kaesong that I feel I know this city already.”
Coming from a family with North Korean heritage, I had butterflies in my stomach as I boarded the coach at 6 a.m. in Jongno, central Seoul. This was a very personal trip for me. I remember Chuseok (Korea’s Thanksgiving) outings to the Imjin River with my late grandparents when they would shed tears as they gazed across 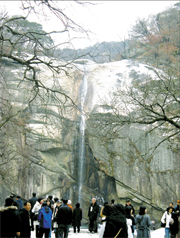 the Bagyeon Waterfall, one of the Three Beauties of Kaesong. All photos by Chun Su-jin

the border to where they were born. On Sundays they would take me to a North Korean naengmyeon (noodles in a cold beef broth) restaurant in central Seoul.
I’d signed up for this trip because more than anything I wanted to meet real North Korean people. My textbooks at school during the cold war had created images of North Koreans with evil horns sprouting out of their heads.
I wanted to meet Northerners in the flesh and blood, and the trip was more than satisfactory in that respect.
I met Yang Gyeong-cheol, one of our North Korean handlers, a real gentleman, who said at the end of the day, “Let us meet again for sure.” Then there was Yun Ok who sold warming ginseng tea for $1 at the chilly Bagyeon Waterfall. And there was Kim Cheong-su, one of our guides, who shared his sharp, and surprisingly detailed, insights on conservative Korean newspapers and the free trade agreement with the United States.
Yang, Yun and Kim were only a few of the North Koreans I met during some ten hours we spent in North Korea.
We didn’t agree on everything, but we agreed to disagree, based on a bond created by kinship and language, though we spoke a slightly different kind of Korean.
During the trip the South Koreans on the trip felt such warmth and friendship with the Kaesong citizens. Humbly yet warmly dressed in their winter coats, some citizens ― especially the children ― waved back to us with big smiles on their faces. The adults on their bicycles or walking in twos and threes stared at us out of curiosity.
Some of us wanted to get off the bus and hug them, not for any political intention, just to show them we are brethren.
That wouldn’t have been possible, of course. North Korean soldiers were ever present.
Before we crossed into North Korea, we were briefed on what not to do.
We were told that under no circumstances were we to make contact with North Koreans and we were warned against discussing politics.
We were also told never to speak of the North Korean leaders without honorifics and to refer to the two Koreas as the “North” and the “South.”
Not everyone on previous tours had been compliant. We were told that some drunk South Korean tourists got caught climbing the wall of a restaurant to get to a barber shop.
The directives and warnings were a bit pointless, though, since our North Korean guides and the people at the tourist sites ― people like Yang ― were friendly and eager to speak to us.
We reached Kaesong at 9 a.m. and our first destination was Bagyeon Waterfall. I remembered from my history books that the waterfall was considered one of the Three Beauties of Kaesong, which was the capital of the Goryeo Dynasty (918 to 1392).
The other two are Hwang Jin-yi, the artist and gisaeng, a female entertainer, and Seo Gyeong-deok, a much respected scholar.
There’s a souvenir shop and North Korean tour guides at each tourist destination. At Bagyeon Waterfall, which is best visited in the spring and summer, a tour guide, who asked not to be named, talked to me about Kim Il Sung, the late leader of the North who died in 1994.
“The Great Leader visited this site on Aug. 26, 1957, and deciphered some writings on a rock near the waterfall,” she said.
The writings are the calligraphy of Hwang Jin-yi, another gisaeng, who spent time at the waterfall. One day she was washing there and dipped her hair into some Chinese ink and wrote a poem on some rock. 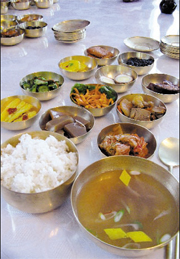 lunch consisted of 13 side dishes served in posh brassware.

According to our guide, the poem said, “The water falling straight down reminds me of the Milky Way in the sky.”
We had ample time to walk around the waterfall, and we then trekked for 90 minutes to Gwaneum Temple where we met a Buddhist monk sporting an unshaven head, unlike many monks the world over.
Another feel-good surprise came when a group of children at the temple sang “Our Wish is Unification,” a well-known song popular in schools in South Korea.
Right after the song, one of the kids on our trip provided some light relief. Bu Ga-yung, 8, said, “It’s my first time to North Korea, but I don’t understand why we can’t use our own money here. Isn’t it the same country?”
Everyone laughed ― you can only use U.S. dollars on this tour ― but the girl had made a valid point.
The monk later hugged the children and said, “You will enjoy the land of heaven when our countries are unified in the near future.”
Then came lunch, which was a lavish affair at the Unification Center, with 13 side dishes. Waitresses dressed in beautiful hanbok, traditional Korean clothes, served the food in luxurious brassware.
The side dishes included boiled mackerel, cooked vegetables and a chicken soup that almost healed our souls.
After lunch, we visited Sungyang Seowon, or the Sungyang Memorial Hall of the respected scholar Jeong Mong-ju (1337-1392) of the Goryeo Dynasty. Jeong is best remembered for his loyalty to kings during times of political instability.
Jeong’s blood is said to be still visible on Seonjuk Bridge, located close to the memorial hall, where he was assassinated. The stain didn’t look too real, but it was interesting to see such a famous site, one I had read about in school.
The last destination was the Goryeo Museum, which holds artifacts including celadon, the specialty of the era, paintings and a replica of King Gongmin’s graves.
Gongmin, who married a Mongolian princess, loved his queen so much he was buried next to her. You can visit the gravesite, as well as that of the Goryeo founder, Wang Geon, but you’ll have to skip the Bagyeon Waterfall portion of the trip ― time is limited.
The tour ends at the museum where the souvenir hunting begins. Chief among attractions are jars of honey, ginseng liquor and books on Kaesong’s legends, all of which have a communist twist. 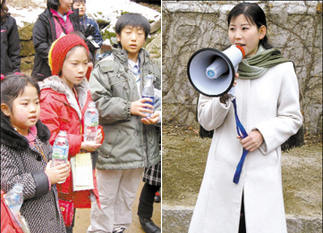 South Korean children sing “Our Wish is Unification” at the Gwaneum Temple. This North Korean guide declined to give her name and was more than eager to talk to South Koreans.

The salesperson, too busy to give his name, excelled at courting customers. “We produce this special product only once a year,” he said as I eyed up the honey. “A rare treat,” he added. I bought a jar for my mother. When I gave it to her, she paused. “Well, it’s very North Korean,” she said. Then she added, “I wish I could have gone to Kaesong with my mother.”
For my own Kaesong souvenirs, I bought a “hangover chaser and liver booster,” powdered tea and some ginseng liquor. But the best souvenir is a group photograph with my North Korean comrades and the mini-Hershey’s bars they gave me.
I’m definitely going back to Kaesong. It feels like home, and I have to keep my promise to Yang. 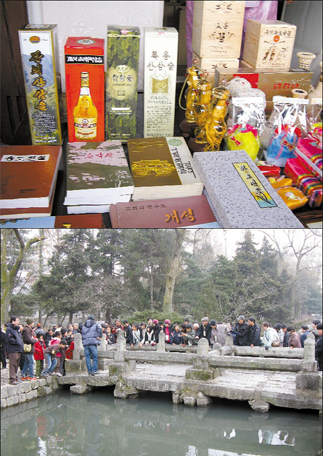 Souvenirs you can buy in Kaesong include ginseng liquor, honey, dolls and books. The Seonjuk Bridge is where Jeong Mong-ju, a scholar in the late Goryeo Dynasty, is believed to have been assassinated. His blood still stains the rocks, it is said.


For more information and reservations, call Hyundai Asan at (02) 3669-3000.
English-speaking guides are available if you notify the company in advance.
Hyundai Asan only runs day trips for now, everyday, including public holidays, except Mondays.
Overnight trips are in the pipeline, but won’t be available in the foreseeable future.
The day trip costs 180,000 won ($192), $100 of which goes to North Korea.