Indie stores buck the bland and the corporate

Indie stores buck the bland and the corporate 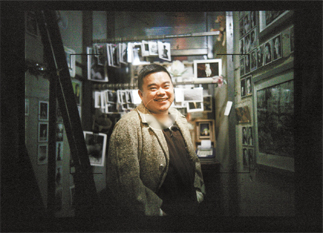 Hwang Jin, surrounded by his photos in his Insa-dong studio, believes a good photograph reveals truth about the subject’s personality. All photos by Jeong Chi-ho

There are still small ventures in Korea that make a difference. Their premises might not be much bigger than the bathrooms in mega corporations like Samsung, Sony or Microsoft, but these companies impart their own unique brand and iconoclastic style.
Starting out as either pet projects of determined individuals or collectives of like-minded employees, the ventures listed below have kept pace with bigger conglomerates.
Take Sponge House, for example, a film import/distributing company in Seoul which specializes in low-budget arthouse films. When the company started out, it didn’t even have a proper homepage and verged on obscurity. However in 2006, the company premiered 57 films ― twice that of CJ Entertainment, the biggest film distributor in Korea. Another branch opened in the Gwanghwamun area, adding to the first Sponge House in Apgujeong. A strategic mix of canny feature film selections and PR events, such as inviting cult director Wim Wenders (“Don’t Come Knocking” [2005] and Land of Plenty” [2004]) to give a cinema talk with fans, continues to make this a refuge for cinephiles in Seoul.
“Bling Magazine” has also walked the road less traveled and gained a steady following. This club culture magazine, distributed free of charge in trendy bars and clubs around the capital, was launched in December 2004. It’s considered an urban text for Seoul’s clubgoers, covering news about musicians, D.J.s, parties and club fashion trends that you won’t find easily in other publications. Along with “Club Days,” a monthly event when clubbers get discounted entrance to 11 affiliated Hongdae clubs, the magazine has taken Seoul’s club culture to a new level.
Smaller record labels formed during the 1990s have also kept major labels on their toes as well as satisfying the taste of a diverse range of music fans. Pastel Music in particular, with less than 10 employees, was selected as “Label of the Year” in 2006, churning out heavyweights in the underground music scene such as Humming Urban Stereo and Sweet Pea.
These ventures are pushing strong, marching to the beat of their own drum. 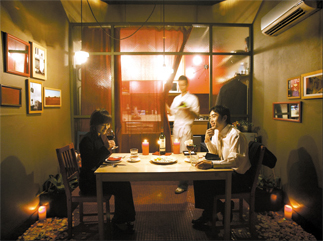 The restaurant In New York, located in Apgujeong in southern Seoul, has only one table.

In a narrow, loft-style photo studio in Insa-dong, Hwang Jin is quietly changing the concept of taking a portrait photograph.
With his round, puppy-brown eyes and cherubic face, Hwang hardly looks the part of a renegade, but his philosophy for taking people’s portraits is anything but traditional.
“My idea of photography changes constantly, but I think ultimately it is the pursuit of finding a fragment of truth about one’s personality and connecting that to an overall image.”
Unlike in other photo studios where you sit between a white wall and a camera with a photographer shouting, “Turn a bit to the left, a bit to the right,” Hwang Jin takes customers outside the studio.
He grabbed my arm as I walked into the studio and took me outside to one of his favorite places to shoot. There was a large hole on a wall with an abandoned chair nearby.
He made a few jokes and asked me about everyday life. I laughed at his jokes and he snapped some shots with his Polaroid Leica camera.
Before I knew it, the shoot was over.
“It might look like I’m not doing my job right but I think people look the most relaxed when they are not posing,” he said.
His idea of a family photo is also skewed from the norm.
“You know how people go to have family portraits taken for anniversaries and special occasions? Well, my Polaroids cost 2,000 won ($2.14) for color and 5,000 won for black and white, and they can be taken without too much planning.
“Friends complain they want to do something for their parents but I think cooking them some doenjang jjigae [soybean soup] and taking a Polaroid or something is just as sweet and meaningful.”

Where dining in private is no problem 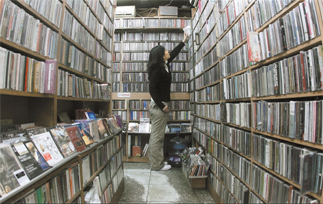 The shelves at Hyang Music, in Sinchon near Yonsei University, are packed with music the bigger chains tend not to stock.

Walking through the restaurant Grand Ciel in red ankle boots and black jeans, the young owner, Lee Song-hee, looked completely at home in her airy restaurant.
It was 3 p.m. and this small Italian restaurant was crowded, its open kitchen buzzing as two chefs rolled pasta and sampled their sauces.
The trendy-looking clientele looked cozy, leaning onto rustic wooden tables. Lee, 28, started two restaurants ― Grand Ciel and In New York ― with a friend, Park Geun-ho.
Previously she worked as a food stylist and party planner, but on a whim she decided to start a restaurant.
She went looking for suitable premises and fell in love with one particular spot, a renovated garage in Apgujeong. “I started In New York because I just loved that location.”
Lee bought the restaurant, named New York 5000 back then, in 2004.
From the outside, In New York looks like an ordinary restaurant, but a closer look through the window reveals a distinct oddity ― there’s only one table.
“The space was so small and we didn’t want to cram in two tables just to make a bit more money. In New York was mostly a labor of love and we wanted to make the space perfect,” she said.
In New York takes only five reservations a day. “We were a bit worried at first but I think having one table makes each meal that much more special for the customers.
“One customer proposed to his girlfriend here a few years ago and they came back for their one-year anniversary recently,” she said.
She thinks the heyday of the big chain restaurants like Bennigan’s or T.G.I. Friday’s is pretty much over now.
“Customers are looking for a special place which has personality and its own innate style or concept,” she said.

The last stand of the CD market

Kim Kun-hill still remembers the first time he saw a CD.
“I was visiting a friend who had just opened a record shop in Dongdaemun. Among a pile of LPs and cassette tapes, there were these cute little things that were so shiny and compact,” he said.
His friend’s shop was named Hyang Music ― “hyang” means “sound” or “echo” in Korean.
In 1991, Kim started selling CDs on the main street in Sinchon near Yonsei University at a shop called Hyang Music, the name inspired by his friend’s shop.
He started out with folk, rock and pop CDs that leaned toward the underground scene, which was popular with university students at the time.
“I think it was the perfect place to open this kind of small record store because university students are much more experimental as far as music is concerned,” Kim said.
The store stocks CDs that you probably couldn’t get elsewhere in Korea, including big chains like Sinnara.
It would include Korean indie bands such as Linus’s Blanket, Elena Jung, Sweet Pea and I Love JH as well as foreign imports from smaller labels like Matador or Siesta.
“I didn’t want to sell music that everybody else had. I wanted to give my customers something unique,” he added.
As he grazed his hand along row upon row of CDs in his tiny store, a man comes in to say, “Hey hyeong! I just came by to say happy new year,” and casually browsed the new CDs in stock.
“Ten, or even five years ago, it was so much more fun doing this business. Customers really invested in music and knew what they were buying. We would go out for jjajangmyeon [Chinese black bean noodles] or something if the shop closed early.”
He doesn’t hesitate to admit that the future of the CD market looks grim.
“The CD business went all wrong. They got too expensive. To be honest, MP3s are definitely the future, so I might have to do something else for a living,” he said.
But the probably passing of the CD is something he said he will regret.
“I think I’ll miss that sensation of picking up a CD and not being able to wait to unwrap the plastic cover and open up the jacket to see the photos and read the lyrics.
“Music might not be tangible as such, but through CDs, it felt very immediate,” Kim said.