Is doggie school a luxurious waste?

Is doggie school a luxurious waste? 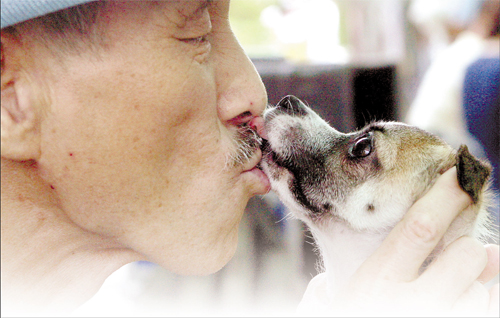 Kim Min-jung recently requested an online consultation regarding Leo, her 2-year-old cocker spaniel.
She was concerned that Leo was too introspective and sensitive compared to other dogs his age.
She was also worried because Leo spent most of his time sleeping.
After talking to Kim Sung-un, the owner of “Happy Mung,” a kindergarten exclusively for dogs, the client decided to send Leo to school with hopes of enlivening his assumed-to-be dull days.
Kim Sung-un examined Leo, determined that the dog lacked social skills and suggested he interact with other puppy friends.
The next day, one of the dog-sitters at the school picked up Leo at 7 in the morning and he was off to school on a school bus with 10 other puppies of all ages and breeds, including Yorkshire terriers, poodles, golden retrievers, maltese and collies. 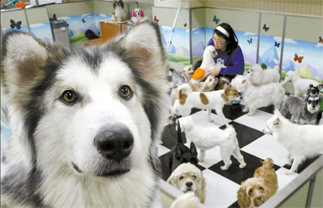 Different breeds play during class. In the background is a pet-sitter.

At school, Leo was served breakfast and received toilet training.
After playing with other puppies and having a quick snack, he listened to music before lunch. After that, the pet-sitter took the group for a walk. Leo took a short afternoon nap and then watched a movie. He then got a ride back home.
Leo’s flourishing day may sound extraordinary. But he’s not alone.
Some 40 puppies attend school regularly five days a week. And Kim anticipates that enrollment will grow.
“Supervised puppy playtime at Happy Mung [www.happymung.com] is fun and educational,” Kim said. “It focuses on socialization and puppy development, covering basic puppy behaviors like house training, jumping over crates and much more.”
Located in Ilsan, Gyeonggi, Happy Mung is one of the three puppy kindergartens in Korea. Kim founded the school in August. Puppies are divided into two classes according to their size.
Once a puppy is in class, pet-owners are not allowed inside. But for those who are uneasy about leaving their puppy with a bunch of strangers, the school offers a closed-circuit television that projects classroom activity.
Kim claims to be the first person to open a pet kindergarten in Korea. He said he got the idea while raising his own white Samoyed, a loyal working breed with a sled dog heritage. They are known for herding reindeer among the people of Siberia. At the time Kim was occupied with work. 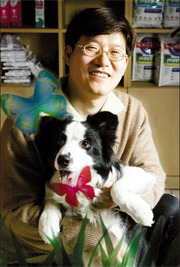 He left home early and returned late at night. He felt sorry for his Samoyed and couldn’t depend on others to look after him.
Leaving him in a nearby pet hotel would be stressful for the frisky puppy because he would be in a cage the whole time.
Kim had to do something.
If left alone, the Samoyed would become melancholy, wary and fainthearted.
While brainstorming for solutions, Kim came upon a good idea - a kindergarten for puppies. The idea, Kim thought, would satisfy the needs and worries of owners like him. In fact, most of his clients at the school work full time.
“A lot of clients lead very busy lives and don’t have the time to develop consistent control over their dogs,” Kim said.
“Dogs that are best suited for school are those that need basic household manners, like name recognition, or how to obey commands.”
Like any other kindergarteners, puppies too feel stressed out on the first day of school when they meet new friends or get scolded.
Some puppies even have diarrhea due to the stress.
Kim says the phenomena is natural and is a necessary process as the puppies adapt to the new surroundings.
“Domestic dogs are descended from wild wolves,” Kim said. “Wolves move in packs and so do dogs.”
He added that dogs socialize and have a hierarchy but cannot develop their instincts when raised at home. Pet schools provide a natural surrounding for them to gather.
For this reason, a cat kindergarten wouldn’t work because cats are very independent, according to Kim. “It isn’t a problem for cats to stay home alone.”
Teaching the dogs to be more sociable is an ongoing task. Some dogs cannot mingle with others. They feel a social barrier and stay in the corner of the classroom. 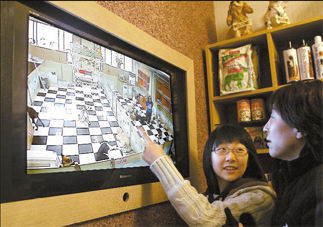 A family who enrolled their Yorkshire terrier checks out the school via CCTV.

“They are like kids in schools,” Kim said. “Patience is needed while training them.”
Like any other teacher, Kim is most gratified when timid dogs learn to interact with others.
In fact, a client at Happy Mung, who asked to remain anonymous, said he’s seen many changes in his 1-year-old Alaskan Malamute named Jang-bi compared to four months ago before attending the school.
“Jang-bi was extremely mischievous but now he knows how to control himself,” the owner said.
Though the school is effective to some dog-lovers, the idea of such an institution doesn’t satisfy everyone.
Lee Joo-hee, 26, is a dog owner but says that pet kindergarten is an unnecessary luxury.
After hearing about puppy kindergartens in Bundang, Yeoksam-dong and Ilsan, she was flabbergasated.
“I have nothing to say,” Lee said. She was astonished that people could spend money on puppy education.
The monthly fee at Happy Mung costs 150,000 won to 400,000 won ($160 to $427), depending on the size of the puppy.
“It’s a waste of time and money,” Lee said.
Kim, the owner of Happy Mung, understands. He says pet owners who obsessively cling to pets and lavish them with gifts shows a lack of jeong, or connection, to society.

In an increasingly individualistic society where giving birth to less than two children has become the norm, love and affection in Korea are being transferred toward pets, Kim explained.
To this, Kim said, “Pets are only pets.”
While managing the school, Kim has seen many pet owners give excessive affection. It’s not healthy for pets or owners.
“Owners should constrain themselves.” Kim said.
He noted how giving affection should be based on knowing how to control pets properly. Owners should become an expert about their pet. Kim proposes that many more pet schools be founded. In Japan, there is at least one pet school in every city.
“People should make full use of their pets,” Kim said.
Currently, animal therapy is used by many psychologists and doctors. It’s a method of medical treatment to improve a patient’s mental state with the help of pets. When elderly or autistic patients care for dogs or other pets, they feel more at ease. Studies have also documented the benefits of human-pet interaction.
Beckham, Kim’s 2-year-old Bercollie, pays a regular visit to a psychiatrist once a week, where he helps inattentive children foster concentration and develop responsibility.
Mingling with dogs provides a sense of stability and consolation to children who may be antisocial or emotionally troubled.
Lee, however, fears person-to-person relationships may be damaged as more people tend to rely on pets for emotional peace.
Amid the growing intimacy with dogs, a new term was coined last year - the so-called “puppy-death syndrome.”
It refers to those who suffer emotionally after their dog dies.
Last November, a single woman in her 30s committed suicide after her 3-year-old dog died. Suffering from a guilty conscience, she hung herself.
After hearing the tragic news, Internet users found it difficult to understand. But dog-fanciers expressed empathy.
“Dogs show absolute obedience and faith to their owners, creating a mutual and intimate relationship,” Kim said.
Puppies are now recognized as part of the family and owners express powerful grief when they die. To satisfy that need, pet funerals are growing in popularity.
According to the Korean Kennel Club, the current law says that when a pet dies, owners should throw the carcass away in the trash. Dead pets are classified as general disposal.
A new law will be enforced starting in February. Pet funeral services will be legalized and newborn pets will have to be registered with a number.
“Angel Stone,” a company providing pet funerals, was established in 2004.
The company’s cremating process is licensed. Clients can choose from cremation or melting the bones into a solid mass, similar to a monument.
Kim Ja-suk, an employee at Angel Stone, says an average of 10 clients a day request a pet cremation.
The whole process costs 150,000 won for an average dog of eight kilograms. It takes around 30 minutes.
There are around 3 million pet dogs in Korea and the related industry exceeds 1.8 trillion won.
“Pet owners should establish a good relationship with their pets,” Kim Sung-un said.
“After all, they are people’s life partners.”