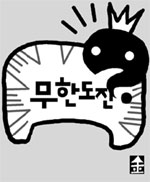 One of the biggest TV hits last year was MBC’s “Infinite Challenge.” Its popularity soared among all age groups and it is widely recognized as one of the most beloved entertainment programs Korea has known.
The show has had its troubles. It got mired in malicious gossip. Some viewers thought some episodes were too similar to “Smap x Smap” on Japan’s Fuji TV channel. The opening of the MBC Music Awards 2007 conducted by the Infinite Challenge team looked too much like concerts by the popular Japanese band SMAP.
The format is simple. Six MCs, all men, have to resolve a challenge each week. It’s true that the teams act childish and appear incompetent. That said, episodes like the sports dance competition that aired on Dec. 8 last year were touching.
But the growing popularity of the show suggests adult popular culture is leaning to the infantile. Watching six grown-ups quarreling is like watching kids horsing around a playground. Even though they put up a united front, shouting “OK, let’s go!” or “I will never die,” the action resembles childish mischief.
These kinds of trivial TV shows compete in a cutthroat ratings war, and they are very different to traditional variety entertainment that had a civic-duty bent. This producers of this kind of TV show, programs designed to reward citizens who epitomized civic duty by obeying traffic laws or being good Samaratins, for instance, believed entertainment should carry a meaningful message.
Infinite Challenge on the surface doesn’t appear to carry such lofty ideas at first glance, but there is an interesting phenomenon at work here.
The men are from the lower classes of society, and they put their health on the line by taking part in the show’s stunts. Being ordinary guys, the action is cathartic for viewers, who probably identify with the M.C.s. We see these guys endure all sorts of hardships each week.
So at the dawn of the New Year, the most invaluable lesson that this show imparts is the importance of cooperation and leadership. The participants depend on each other, they have to solve the challenge together and the gags are group-oriented.
Individuals shine only in the context of the team. In this regard, the main M.C. Yoo Jae-seok plays a crucial role. Whenever the team is at odds with itself, he must resolve the conflict.
Korean society should pay due attention since it trying to create a new country in 2008, and cooperation and leadership matter.