The changing face of Korean makeup

The changing face of Korean makeup 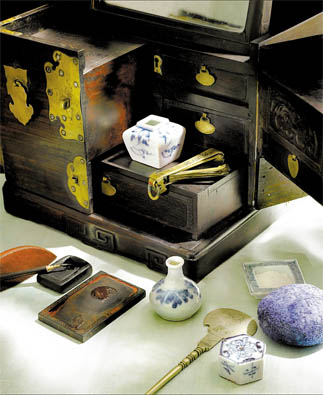 The passionate pursuit of facial perfection is as old as time.
Statistics from last year indicate cosmetic sales are thriving in Korea. According to Britain’s Data Monitor, the beauty industry here ranks 10th in the world. Yet in terms of GDP, Korea ranks 14th among OECD countries. That means the quest for “outer” beauty currently exceeds the nation’s economic status.
That’s why companies like Amorepacific, the biggest cosmetics company in this country, has made such a splash overseas in such a short time.
What’s interesting about the trend in beauty products here in the last few years is the popularity of cosmetics lines that use traditional Korean ingredients. The most successful companies are the Sulwhasoo brand by Amorepacific, The History of Whoo line by LG Household and Health Care and Danahan by Somang Cosmetics.
“Traditional ingredients in Korean cosmetics were organic,” said Lee Ji-sun, curator at the Coreana Cosmetics Museum run by Coreana Cosmetics. “The brands appeal to consumers who want organic-based cosmetics today.”
The museum, opened in 2003, started life as the private collection of Coreana chairman Yu Sang-ok. On display are around 300 items dating back to the Three Kingdoms era (57B.C.E. to 668). They include makeup cases, tools, combs and accessories.
As Lee walked among the artifacts in the museum, she pointed out a poem by Yi In-ro (1152 -1220), “Follow the Example of Dong-pa: Wake Up Early and Comb Your Hair.” Dong-pa was a celebrated literary figure from the Song Dynasty noted for being well groomed. 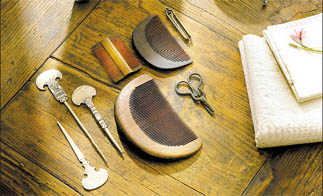 “In Korea, cleanliness was next to godliness,” Lee said. “During the Three Kingdoms Era, the aristocracy and scholars considered it unthinkable to go outside without washing your face and combing your hair properly.”
In fact, a tidy appearance was so important that men used to wear a smattering of face powder and light make-up. “Keeping clean was important for men as well. It symbolized that their inner spirit was in order. This didn’t mean they were meticulous in their makeup but their status had control over physical appearance,” wrote Cho Ji-jin, a contemporary writer about traditional clothing and customs.
“There were two key elements that were important in making up one’s face ― a poreless, fair complexion and beautifully arched eyebrows,” Lee said.
In “Donguibogam (Medical Secrets from the East),” an influential health book written in 1610 by Huh Jun, emphasis was put on avoiding discoloration and pimples.
“Koreans preferred a fair complexion because a dark skin was a sign of poverty,” Lee said.
For this reason, face powder made from rice or millet was popular.
Women would also pluck their eyebrows with tweezers and pencil lines above their eyes using charcoal.
“One might think, by browsing old paintings and drawings that women drew only black eyebrows. But in fact they used many shades, including light brown, light gray, brownish-gold,” Lee added.
The shape of the eyebrow was rarely uniform. In “Gyuhapchongsuh (A Text for Women),” written in 1809 and considered the ultimate encyclopedia for women during the Joseon Dynasty, 10 different eyebrow curves are identified.
“This shows the aesthetic importance of the eyebrow,” Lee explained.
Color, especially on the cheeks, was also used. From the Three Kingdoms Era, women used yonji, red circles made from safflower, on their cheeks to get a rosier hue. However, creating a pure red color from safflowers was labor-intensive, so women from lower-class homes sometimes cut circles from dried red peppers and placed them on their cheeks for a similar effect. 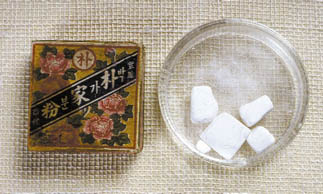 Another old beauty technique was using plants and seeds to cleanse the face. “Women used to wash their faces using a powder made from mung beans or red beans that they mixed with water. Because the mixture contained saponin, a substance that makes soap lather up, it was ideal for cleansing,” she said.
It’s possible to glimpse traces of subtle makeup practices in murals from the Goguryeo Kingdom (37 B.C.E. - 668), such as putting rouge on one’s lips and cheeks as well as grooming one’s eyebrows.
Makeup practices developed during the Goryeo Dynasty (918 to 1392) when gisaeng, or female entertainers, started to use elaborate cosmetics techniques. They would powder their faces snowy white, pluck and draw their eyebrows into defined arcs and apply oil to their hair for a silky mane.
“But women from middle-class and aristocratic households thought this practice was rather cheap and opted for a lighter approach,” Lee said.
This more subdued version is called damjang. Su Geung, a Chinese envoy at the time, wrote in her book “Sunhwabongsagoryeodogyeong (An Introduction to Goryo)” that “The ladies of Goryeo do not like to put many things on their faces and only use powder. They do not use color on their cheeks or lips and draw their eyebrows in the shape of willow leaves.”
There are even records from the Goryeo Dynasty, like Kim Chun-tek’s “Chungguyeongeun (A Book of Poetry)” (1728), for example, which state that women dyed their hair towards the latter part of the era.
The tendency towards fancier, more elaborate styles in makeup dwindled during the Joseon Dynasty (1392 - 1910). This was when Confucian values of frugality and humility prevailed. In particular, aristocratic women used color on their faces only on special occasions and used more natural-looking peach-toned powders instead of white.
“During this era, the lines between social classes became more rigid. The upper classes looked down on the makeup worn by gisaeng. Natural tones like peaches and pinks became popular, and stark contrasts in color, like a white face and thin, black eyebrows, were seen as overtly sexual,” Lee said.
After the 1876 Ganghwa Island Treaty, which Japan used as a basis for colonizing Korea, Korean women came in contact with new cosmetics from other countries, in particular China, France and Japan. Over the next few decades, the number of imports steadily increased. By the 1920s, European and Japanese powders, creams, soaps and perfumes were bought up by actresses and the upper classes.
In most cases, the general public couldn’t afford them.
Consequently, in 1916, Korea’s first home-grown cosmetic powder was created. Bakgabun was an overnight sensation. It was affordable and readily available. Riding on its success, copies called Sugabun and Janggabun hit the market.
“At the peak of the boom, Bakgabun was selling more than 50,000 products a day in Korea,” Lee said.
Bakgabun went out of favor as quickly as it rose to prominence after the lead in its composition became evident. “Lead was used in the formula to make the powder stick to the skin, but the lead rotted the women’s skin,” Lee said.
After Bakgabun disappeared, Korean companies started making lead-free powders. Companies like Amorepacific, formerly Taepyeongyang, became industry staples.
During the mid and late 20th century, following Korea’s swift economic development, women saw more examples of Western fashion and beauty trends.
The Korean cosmetic industry was in full bloom by the 1960s and 1970s, with the development of foundation, eyeliner, mascara and lipstick. Pomades for men were also popular during this period.
With the introduction of color TV in Korea in 1981, makeup became much more colorful and Westernized. Women started to indulge in makeup techniques that made a Korean face appear more Western. These techniques included shading the side of one’s nose and using dark eyeshadow. In the 1990s, the emphasis switched to more natural-looking complexions.
“The traditional cosmetics and makeup techniques of our ancestors have come full circle,” Lee said. “The natural approach, in using organic plants and seeds, is seen as healthier. Just look at the sales statistics for those brands that use traditional Korean ingredients.”