What did Weber say?

What did Weber say? 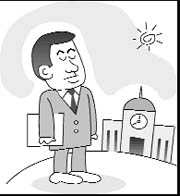 The German philosopher Georg W. F. Hegel said that “Bureaucrats are entrusted with protecting the private property of the country and providing service to the people.”
Yoshida Shoin was the spiritual leader during the Meiji Regime in Japan. He was beaten harshly by his teacher just for wiping away sweat in a public situation. He was beaten because wiping off sweat was considered a private act. Although it might seem harsh, in times gone by people had the mindset that bureaucrats were public servants.
To manage a large and complicated national organization, a bureaucratic system is unavoidable. It is within bounds to say that the reason the ancient Chinese empire was able to exist was because of the well-organized bureaucratic organization and bureaucrats.
There were times, however, when bureaucrats used their power excessively and burdened people as they fought over positions and provinces.
The respect for officials and disrespect for the people was the reason that Japanese private financial institutions lost their competitiveness. They were no longer public servants.
Alvin Toffler called arrogant bureaucrats as “invisible political party.”
In the presidential transition committee report made last Thursday, the Government Information Agency said, “Public servants have no spirit.”
It was a statement that tried to justify their campaign of closing down the press rooms .
Minister Kim Chang-ho quoted Max Weber, saying “I just meant that bureaucrats can only work under the philosophy of the government they are serving, but it has somehow been reported as expressing a specific individual’s moral curve.”
Even if this is true, we should not criticize the public servants who are working hard.
One other thing. Was this the only thing Weber said?
Weber also pointed out, “The goal of the organization is affected by the individual’s goals.” In addition, he pointed out the side effect: “They start handing over responsibility rather than taking responsibility.” Rather than trying to avoid criticism by using Weber’s words, shouldn’t the agency first admit that it has fallen into the pitfall that Weber had worried so much about?
Like a couple that has been married for many years, bureaucrats and society often grow to resemble each other.
Why is it that the bureaucrats are still only talking about Weber when enterprise and society are changing so quickly?