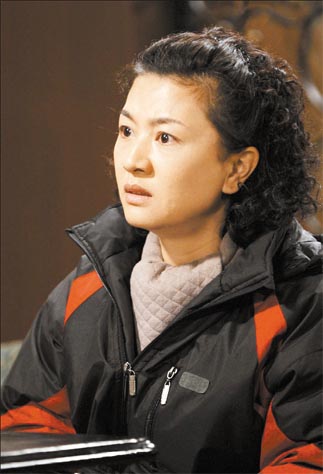 The stereotype of a Korean ajumma, or housewife, is a stocky woman with a tight perm wearing loose pants and a bubble-patterned kerchief around her neck.
And most seem to deploy sharp elbows on the subway.
So it’s a bit of a surprise that the Kim Hye-sun, 38, has transformed herself into such an ajumma in SBS TV’s weekend drama, “First Wives’ Club” (2007).
Kim plays Han Bok-soo ― which means revenge in Korean ― one of the toughest matrons around.
Bok-soo is loud and assertive. She takes on her husband when she finds out he’s having an affair with Jung Na-mi (Byeong Jung-min), his secret girlfriend.
Bok-soo feels even more betrayed because she has spent her whole married life selling fish at the market to support her husband, who wants to become a doctor.
In previous dramas like “Lotus Flower Fairy (2004)” and “The Infamous Chill Sisters (2006),” Kim was a good-tempered shaman and a homely housewife, respectively.
It’s the first time in Kim’s 20-year career that she has played against type.
“I completely got rid of my image,” she said.
When Moon Young-nam, the scriptwriter, offered Kim the role, she accepted without hesitation.
She had some doubts at first about how to play the role, but after rehearsals she began to feel her way into her character.
She finds the strength of the character attractive.
“Most actresses would crave this role,” Kim said. “You must try out this kind of character sooner or later.”
She says actresses eventually play characters like mothers or grandmothers to continue their careers.
While establishing her new character, Kim came to realize the importance of natural beauty.
She says actresses who are getting older look prettiest when they are not deeply attached to artificial beauty.
“In the past, it took me several hours to finish my makeup,” she said. But now, for this role, it takes five minutes.”
All she does is powder her face. Such a natural look emphasizes her character’s job as a fish vendor.
To learn about the job, Kim visited Garak Market in southern Seoul and learned some fishmongering skills.
“Actually, real-life fish vendor ajumma polish their nails and wear earrings,” the actress said. “But if I appeared on television with such a look, viewers would think I looked unrealistic.”
Kim heard that some viewers had said Bok-soo’s husband had an affair because of Bok-soo’s looks. But she saw the situation differently.
“Bok-soo’s husband is the kind of guy who would have an affair no matter what his wife looked like.” she said.
That’s probably why her husband’s name ― Lee Ki-jeok ― sounds like yigijeok, Korean for selfish.
The character Lee even turns down Na-mi in fear that he might be prevented from becoming a professor.
Bok-soo gets her revenge. She browbeats her husband into signing a written promise to give up all his money, his property and custody of their child.
She even high-kicks Na-mi, without using a stuntman.
“I caught a cold while preparing for the action scenes,” Kim said.
She even coughed up blood from all the screaming and crying she did during certain scenes as Bok-soo.
The character wasn’t always so upbeat, though. Bok-soo was heartbroken by her husband’s adultery.
In one episode, as she hugs her friend Hwa-shin (Oh Hyun-kyung) whose husband had also cheated, the tears flow freely.
Though it was Bok-soo the TV drama character that cried, it was Kim who shed the tears.
Kim didn’t cry because she was in character; she was actually genuinely upset.
She was thinking of all the hardships that characters like Bok-soo and Hwa-shin went through in real life.
“Those husbands who feel guilty reading this better return back home,” Kim said. “The drama tells us that adultery is not allowed under any circumstances,” she said.