[TV review]Ring out the bell, but with home comforts

[TV review]Ring out the bell, but with home comforts 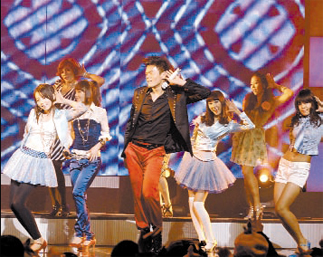 Sing-a-longs, flavor of the day on end-of-year TV specials. [MBC-TV]

Since I hit my 30s, it has been my principle to remain home and rely on television to see in the New Year. Before, when I had burning blood running in my veins, I was always out there, ready to celebrate the arrival of a brand new year with a big party.
Well, not anymore, because now I am old and lazy enough to know the comfort of a quiet, at-home celebration. The hustle-and-bustle in Jongno around the Bosingak Bell is too familiar. Been there, done that and got the T-shirt.
In any case, 2008 sounded so foreign to me, like quince that is too bitter and tough to be enjoyed raw. Quince needs to be sliced and then dressed in sugar to be appreciated.
But TV helps create reality, and it’s a great way to end the year. You get to see classic films that you’ve seen many times before, but indulge yourself once more.
“The Sound of Music” is one such movie.
And there are those debate shows on current affairs that preview the year head, a must-see for political junkies.
So I settled into the sofa, having bought fresh batteries for the remote control and a big tub of ice cream, positioned the heater near my toes and waited for the countdown.
Most of the channels covered the tolling of the Bosingak Bell ceremony, which takes place in Jongno, central Seoul, every year. It was funny to be watching from the warmth of my flat. It looked so cold, so packed with onlookers that I felt a little sad I wasn’t there, too.
In the past, I was more than willing to usher in the New Year and bask in hope for the months to come. As I watched the thousands of wellwishers singing and shouting their messages of goodwill, I wondered whether I was missing out.
Then I remembered the tub of ice cream and dragged the heater a little closer.
No, home is where the party is this year: with the year-end rituals of Korea’s mainstream shows.
At this time of year, in addition to the movie reruns and chat shows, there are the awards ceremonies. You know the drill ― giving awards to the best actors and singers of the year.
More precisely, awards went to entertainers who appeared regularly on their channels.
In my opinion, MBC-TV did a grand job. It presented what the producers called the “Pop Song Grand Festival.”
Top comics from the MBC-TV hit show “Muhan Dojeon (Unlimited Challenge)” acted as M.C.s and organized a bunch of celebs into two teams. The competitions involved lots of singing, pranks, a cascade of water falling from from the gallery and special lighting effects.
The other two mainstream channels, KBS-TV and SBS-TV, didn’t produce such great entertainment. KBS-TV stayed traditional and sent anchors and other celebrities into the cold to cover the Bosingak Bell event.
Pity for them ― it was minus 10 degrees Celsius (14 degrees Fahrenheit) out there.
Meanwhile, SBS-TV featured a prize-giving ceremony for actors whose main fame was a pretty face and a decent wardrobe.
Interestingly, scandal emerged. The tabloids accused the Muhan Dojeon show of plagiarizing elements of their show from concerts of the popular Japanese group called SMAP.
The producers said in their defense that it was “not plagiarism but parody.”
This is not the best excuse in history.
Now, some stern readers may raise an eyebrow at the timing of this column. A New Year’s special in the Jan. 8 issue?
Please bear in mind that in Korea you can count days by the Lunar New Year calendar. It is still in fact year-end by that calendar, as the New Year falls next month.
So, if you thought the year was over, think again. We’ve got more year-end festivities to look forward to, and more shows to watch.