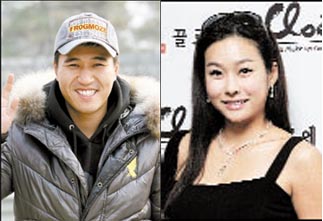 Some people call alcohol “liquid courage.” Actor Kim Jong-min couldn’t agree more.
He’s tried to keep it a secret, but Kim, 29, and actress Hyun Young, 32, have been dating for nearly a year ― and his drunken confession of his affections is what won her heart.
The two met last April while shooting KBS 2TV’s variety show “Six Girls.” When the cast traveled to Saipan to record a special feature, Kim and Hyun recognized a mutual spark. He made his boozy declaration when they arrived back in Korea.
News of their secret romance came to light last week when the paparazzi caught the two actors on a New Year’s Eve date. Once the story broke, Kim and Hyun publicly admitted to being in a relationship.
While hosting MBC TV’s “Section TV Entertainment,” a program on celebrity news, Hyun Young publicly showed her affections. “I was attracted by Kim’s persistence and innocence.”
Kim is younger than Hyun Young, which has got the gossipmongers around town overexcited.
Meanwhile, Hyun Young is currently hosting MBC TV’s “Zippy Ziggy,” and Kim is working at Seoul District Court in Seocho District, southern Seoul, as an alternative to military service.
Presumably he stays off the drink while he’s dealing in legal matters.
By Lee Eun-joo