[Talk of town]Nightmare of a new movie

[Talk of town]Nightmare of a new movie 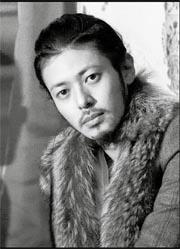 Japanese actor Joe Odagiri began the New Year working with the Korean director Kim Ki-duk on the movie “Bimong,” the film’s distributor Sponge House announced last week.
Odagiri, 31, is known for both his handsome looks and choice of independent films. Kim, 48, is best known for his controversial style and stories. He’s known as the “libertine” of the Korean independent film scene, and his movies have both pleased and enraged critics.
In Bimong, which means “sad dreams,” Odagiri has frequent nightmares about his girlfriend who has disappeared. He then meets another woman (Lee Na-young) who, by some strange quirk of the space-time continuum, gets stuck in one of Odagiri’s hellish dreams. It’s as if his nightmares control the poor woman.
Odagiri made a name for himself in quality independent films such as “La Maison de Himiko (The House of Himiko),” which was directed by Isshin Inudou in 2005. In that film, Odagiri stars as a beautiful gay man.
Roles like that have built a small yet firm fan base for Odagiri in Korea.
By Chun Su-jin