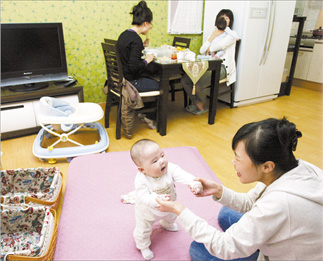 The new year is just a week old, and the country is already bracing for turbulence.
Conservative men are furious that Korea’s conventional family structure is under threat.
Their fears stem from the abolition of the hojuje, the patriarchal family registry system, which as of Jan. 1, 2008, is no longer legal.
They’re also unhappy about the increasing number of alternative family structures seen in Korea, especially more single mothers.
Sohn Jeong-gu, a 65-year-old cab driver, is typical of a certain kind of guy.
“Getting rid of the hojuje is absurd,” Sohn argued, his face turning red. “This will lead to nothing but confusion and the loss of tradition and family roots.”
The hojuje recognized only men as family heads, and it was criticized for infringing on women’s rights.
Korea’s Constitutional Court ruled in February 2005 that the hojuje was unconstitutional. A replacement individual identification system gives women more equality.
“The impact might not be felt yet, but in the future nobody will know their family roots,” Sohn said.
Before, women had to register under the male head of the family. This gave them fewer rights.
For example, men had more custodial rights than women, even when the mother was the child’s principal caregiver.
And if a divorced woman had custody of a child, that family was not a “legal” family.
The Korea Women’s Association United has campaigned for years against the patriarchal system.
“The abolishment of the hojuje system is not only a victory for women’s rights, but also a victory of all human rights,” said Kim Keun-ok, secretary general of the association.
“Hojuje epitomized a male-oriented society that discriminated against women,” she added.

But for Sohn, women’s rights have come too far too quickly. “This is all because Korea has opened up to equal opportunity too rapidly,” the cab driver insisted.
And his views are not unusual.
“This [hojuje] system has been preserved for over 5,000 years,” said Park Jeong-nam, secretary general of the Korea Clan Leaders Federation.
“Abolishing the system has done more than just shake the roots of families in this country,” Park said. “It’s obliterated our nation’s identity and erased a history that has lasted for thousands of years.”
According to Park, there are 300 Korean family names, which are subdivided among 2,800 clans.
“This is our traditional culture and history,” he added. “With the new system there could be a situation where a younger brother marries his brother’s widow and his nephew becomes his son. Or another situation where in one family, the family names of the grandfather, the father and the son are completely different.”
For Park, it’s like the end of the world.
“The family structure as we know it may cease to exist in the future, and there would be nothing but unethical chaos,” the secretary general stressed.
“I have two daughters and I had my own share of complaints over the hojuje system especially during jesa [a traditional ritual showing respect to ancestors] when my daughters had to stand behind the men while the men in the family bowed to the ancestors,” Park went on.
“But it’s a tradition we must protect or else there will be confusion and complete disorder.”
Park said lawmakers passed the law in 2005 because they were too concerned about women’s votes.
Park said Lee Sang-deuk, a Grand National Party lawmaker and older brother of President-elect Lee Myung-bak, is a member of the clan organization.
With the help of Lee Sang-deuk, they plan to propose that the new government revise the hojuje system.
“We’re not demanding that the new individual identification system should be overturned,” Park said. 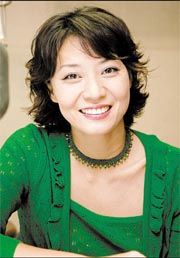 “Even a bad law is the law, and therefore we are going to suggest a way to keep the tradition and our history alive.”
He said the new system only benefits a handful of liberal women in this country. “The law reflects the lives of few minority groups and not the general public,” Park said.
“Instead of completely throwing the hojuje out, what the Roh Moo-hyun government should do is create a special law that benefits such small groups while keeping the general frame of the hojuje the way it is.”
The federation is planning an election campaign movement to prevent the 161 lawmakers who voted in favor of abolishing the hojuje system from getting re-elected to the National Assembly in the April general elections.
“If the new government doesn’t straighten the hojuje system and prevent the rooting out of the patrilineal structure, there will be no future,” Park said.
The abolition of the hojuje is just one of the changes shaking the conventional family structure.
Another is the Huh Su-gyeong story.
Huh, a celebrity radio show host, gave birth to a daughter on the last day of 2007. What’s interesting is that the identity of the girl’s father remains unknown ― Huh simply made a visit to a sperm bank.
Twice-divorced Huh is what’s known as a “Ms. Mom,” a term referring to a single mother who gave birth using donated sperm.
This might be a relatively accepted practice in Western countries, but in Korea, steeped in Confucian heritage, it’s a radical shakeup of how people view the family unit.

The question now is whether or not the process by which Huh got pregnant was actually legal.
According to Jeong Taek-il, an official at the Ministry of Health and Welfare, women who receive donated sperm from sperm banks under current law require their spouse’s agreement.
But there’s a qualifier. A clause adds, “when there is a spouse.”
That last clause is vague enough that it is unclear whether Huh’s case is legal.
“It depends on how a person interprets the law,” Jeong said.
Surprisingly, Jeong said the government doesn’t manage sperm banks; that responsibility falls to the individual hospitals that run the facilities.
The Health Ministry estimates that as of December 2005 there are 64 medical institutions holding stocks of the sperm of 5,544 individuals ― mainly college students. They undergo a medical check and make a donation once every week or biweekly.
A spokesperson for the Cha Medical Center in Seoul said donors get paid around 100,000 won ($106) per visit.
Jeong said the Health Ministry has already presented a bill that would be more specific about requirements for receiving a sperm donation.
“A single woman wanting to get pregnant may assert her rights to have a baby, but considering the general sentiment of Korean society and the welfare of the unborn child, we have decided to take a stronger position on this issue,” Jeong said.
“However, changes in society mean laws have to be modified from time to time,” he said.
Huh is not alone in making public her desire to go it alone. While it might not be a trend, women are talking more freely about their thoughts on marriage, babies and husbands.
In July last year the actress Kim Cheong said in a television talk show she wanted a child more than marriage itself.
“I want to get married, but more than marriage I want to date, and more than dating I want a child,” she said.
The acclaimed soprano Jo Su-mi, also unmarried, said last year she wants a baby, but through artificial fertilization. No husband need apply.
Further modifications to laws that many Koreans, especially women, feel are outdated are being adopted.

Since January last year it has become easier for single parents to adopt. The law used to state that adopters had to be legally married. But in order to promote more domestic adoption, that law was changed.
However, non-Koreans who wish to adopt Korean kids still have to be married.
Kim Hye-young, a researcher at the Korean Women’s Development Institute, said the conventional family structure of husband and wife and their offspring is dissolving as the cases of alternative family formats, such as single parents or “Ms. Moms,” or married couples without children, rise.
“This is a trend that is universal throughout the world and this trend is going to increase in Korea,” Kim said.
The figures back her up. The Korea National Statistical Office said that in 2005 around 40 percent of the 15.9 million families in Korea consisted of households of two members or less.
One of the problems, Kim said, is that people nowadays look at marriage as a restraint. “In the past family was about sharing and making sacrifices, but today people are more self-centered and they put more emphasis on their personal wants,” Kim said.
“They want to live in a family that suits their desired lifestyle.”
Predictably, money lies at the root of problems. “Running a family of more than two is becoming a financial burden,” she said.
Most people choose to get married when they are financially stable, Kim pointed out.
But then they run the risk of delaying having children, a problem for women over 35 when their fertility levels diminish.
Huh’s story should not be viewed as a trend, though, Kim argued.
“Her case is very special, but it sends the wrong message,” Kim said.
She pointed out that Huh’s lifestyle enabled her to raise a kid by herself. Many working women don’t have that luxury, Kim said.
For some, it’s not that marriage is a restraint; it’s irrelevant.“To me a family is a group of people that I care about and I am responsible for,” said Chang Sung-cheol, a 34 year-old photographer.
Chang is currently living with his girlfriend, who is three years older than him. Yet cohabitation before marriage is considered a taboo in Korea.
“Although we’re not legally married, we are practically husband and wife,” Chang said.
“I don’t necessarily think that a family should consist of people who share the same bloodline or the same roots,” Chang continued.
“And if I have the opportunity I would like to adopt a child. It really doesn’t matter if that child has my blood or not because once that child is under my care we are a true family. “No matter what society says.”