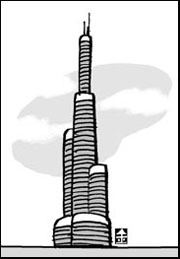 In the fall of 1994, a team of French underwater archaeologists raised one of the mysteries of history to the surface. Located seven meters under the sea were the relics of the Lighthouse of Alexandria, which was built on the island of Pharos, off the northern coast of Egypt.
The mythical lighthouse is known to have been built around 250 B.C. by order of the Egyptian Pharaoh Ptolemy II Philadelphus. A large sculpture of a goddess stood above the tabernacle at the top of the lighthouse which was estimated to be 135 meters high and made of marble. The tabernacle had equipment to make fire and a huge reflecting mirror. Light at the tabernacle could be seen more than 40 kilometers away. The lighthouse was one of the seven wonders of the ancient world, but it was gradually destroyed by a series of earthquakes between 1100 and 1307.
Granted that the lighthouse was, in effect, the tallest pagoda in antiquity, the tallest wooden pagoda of old was found on the Korean Peninsula.
That was the nine-story pagoda built in the year 645 A.D., during the reign of Queen Seondeok, located in Hwangryong Temple in Gyeongju. That the pagoda was 80 meters high was confirmed by documents found inside a box ensconced in the foundation stone. Considering that the tallest existing wooden pagoda, which is in China, is 67 meters high, one can only imagine the dominating presence of the pagoda in Korea at the time. The Silla Kingdom built the pagoda with the desire to dominate neighboring countries after it lost many castles to attacks by neighboring states. The pagoda and the temple were burned to ashes by Mongolian attacks in 1238. However, knowing that Silla unified the competing kingdoms, thus ending the Three Kingdoms Period, the pagoda seems to have served its purpose.
The tallest pagoda in contemporary times is Birj Dubai, the massive skyscraper being built by Samsung Corporation in Dubai.
The Associated Press reported on Sunday that the building has already set a record with its 158 stories and height of 598.5 meters. It has surpassed the 101 Building in Taipei, which is 508 meters high, as the tallest building in the world.
Birj Dubai is to be completed by next year, and will top out at more than 160 stories, 800 meters above the ground.
It is said that a taller building is unlikely to be built because it may not be commercially viable. But can economic efficiency stop the human desire for ostentation?
I would rather see people try to reach the sky by accumulating merits than by building higher pagodas.

*The writer is an editorial writer of JoongAng Il-bo.