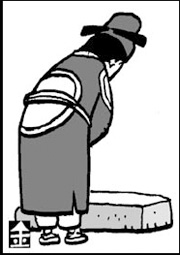 Certain rulers must have enjoyed special titles of honor that applied only to them, part of the sweet fruit of power.
Honorifics reserved for people who hold power are numerous and varied. Well-known examples are pye-ha, referring to an emperor; jeon-ha, a king; and gak-ha, a general or a high official. Pye-ha was first applied to the first emperor of Chin, the derivation of the name of China. Pye refers to the stepping stones or staircases that climb up to the main building of an imperial palace. Jeon refers to the pavilion in a palace, and was therefore applied to a king, a prince, an empress or a feudal lord. The literal meaning of gak is similar to jeon, yet it has been applied to a status a little bit lower than jeon. The commonly used word jeongak generally means a pavilion; the character jeon precedes it.
Meanwhile, another honorary title has the ending word ha, which means “below.” Honorific titles such as pye-ha, jeon-ha or gak-ha mean “below the staircase” and “below the pavilion” respectively. That may sound bizarre, but in truth it has been one of the most appropriate ways to pay respect to the boss: by lowering one’s own status.
Gak-ha was often employed in Korea to refer to the head of state during the military regimes of Park Chung Hee and Chun Doo Hwan.
Koreans who pay courtesy calls to supreme leaders of China often apply the honorific gak-ha to their hosts. However, the Chinese tend to find the title gak-ha rather awkward and inappropriate as a title for their top authorities. That is because gak-ha was previously bestowed on one of the emperor’s many high-profile officials, not the supreme leader.
The term gak-ha disappeared when the Kim Dae-jung administration left. Daetong-ryong is the Korean word for president. In the past, people got used to saying daetongryong-gakha at official occasions. But Kim Dae-jung preferred the more common honorific nim instead of gak-ha. Now, daetongryong-nim has taken root.
After Lee Myung-bak became the president-elect, the question arose whether he should be called daetongryong-dangseon-ja or daetongryong-dangseon-in, both meaning president-elect. The presidential transition committee asked that he be called dangseon-in.
Why the committee wants to avoid the name dangseon-ja, which has long been just fine for past presidents-elect, is not clear. One is bound to suspect the motives of a committee that makes a big deal out of a name. It ought to ask itself if its desire for power was expressed in that small crack.