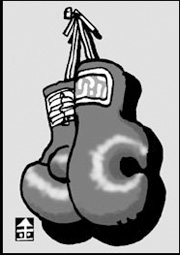 Boxing is a sport with bipolar extremities. One bright part is that boxers train their bodies and that the sport gives youths a dream. Lately, boxing has even been considered a way to lose weight. On the somber side, however, boxers can be seriously injured or even killed.
Since 1890, 1,355 people worldwide have died due to boxing matches, according to an article published in a U.S. sports journal last November. In the past, the protective measures weren’t sufficient. However, even during the 1990s, 78 people died. Since 2000, another 68 have died, including two females. Those who died did not always lose, either. About 5 percent of the boxers who died either won or tied their match, just as Choi Yo-sam did recently.
The deaths occurred regardless of weight, too. Twice as many relatively lightweight boxers died, in proportion to heavyweights.
The main reason the boxers died, in 80 percent of the cases, was injuries to the head, neck and brain. Heart failure was the next biggest reason, accounting for 12 percent of the deaths.
Boxer Choi Yo-sam died of a subdural hemorrhage. Boxing requires frequent attacks to the head and face. That’s why the dura, the outer protective covering of the brain, is highly likely to be injured. Professor Satoshi Sawauchi and his team in the neurosurgical department of Jikei University in Japan discovered in 1995 that 75 percent of the brain injuries boxers suffer are subdural hemorrhages.
Experts say that to prevent deaths from boxing, the number of matches should be reduced. Boxers should also be thoroughly examined both before and after a match. Some go even further, saying professional boxers also should have to wear headgear.
Critics say that such gear is not able to protect its wearer from a concussion, since one’s entire brain trembles when he is hit on one part of the head. This transfer the damage to the other part, as well. Reducing the number of matches is not easy, either. Even amateurs who fight less than three rounds see tragedies occur in the ring.
People are continuing to demand that the national pension fund be reformed in the new year. The pension fund is the headgear of the aging society, but it still does not seem reliable. Meanwhile, the number of the matches in our lives is relentlessly increasing as our life expectancy keeps growing.
“Always protect yourself,” said Frankie, the trainer of the heroine in the movie “Million Dollar Baby.”
Considering that we live through uncertainty, just as boxers do, that’s good advice.

The writer is a special reporter on health of the JoongAng Ilbo.