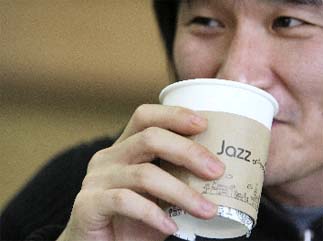 Kim Yeon-soo, author of the critically-acclaimed novel “Whoever You Are, How Lonely You Are.” [JoongAng Ilbo]

The novelist Kim Yeon-soo combines two qualities writers crave.
His novels are acclaimed by fellow writers and critics, and his latest book is a bestseller in Korea.
Kim, 37, has swept up most of the local literary awards. Last year he won the prestigious Hwang Sun-won Award for his novella “The Comic Who Headed to the Moon.”
Before this interview, I read his fourth novel, “Whoever You Are, How Lonely You Are” (Munhak Dongne Publishing).
Published last year, it’s been on the bestsellers list for a number of weeks. I also took a look at his first collection of essays, “Phrases of Youth,” published in 2004.
Kim said he’d wanted to be an astronomer or a guitarist when he was at high school.
“I think it was fate that I ended up majoring in English literature,” Kim says.
“If I hadn’t studied Ian Watt’s ‘The Rise of the Novel’ at college, I probably wouldn’t have become a novelist.”
What interested Kim was Watt’s thoughts on the English novelist Daniel Defoe, author of “Robinson Crusoe” (1791). Watts said Defoe’s novel was intricately related to the advent of capitalism and colonialism in the British Empire.
“I was immediately drawn to Watt’s theory. It inspired me to think that if a novel is a social construct, I could write one, too ― even if I’m not a genius.”
Before he debuted as a novelist, Kim wrote poems. He recalls the first time he heard a literary magazine was going to publish his work. It was the happiest moment of his life. He was a senior at college at the time.
“That summer, I wrote poems for hour after hour,” he says, “enough for five volumes.”
Kim stopped writing poetry when the literary critic Kim Hyeon died.
“I thought he would be the only person who would understand my poems,” he said.
Kim read about Kim Hyeon’s death in a newspaper. Aimlessly wondering the streets, he’d spent the night on a bench outside a hospital emergency room. The newspaper had been discarded and Kim saw the critic’s obituary.
“I’d really wanted to show my work to Kim Hyeon and in that moment in the park all my hopes vanished,” Kim said.
Kim started writing novels in the belief that good literature leads to social change. Like all Koreans his age, he has seen his fair share.
He was a teenager when civilians were killed in the democratic uprisings of the 1980s. He went to college when the Korean Teachers Union fought for labor reforms and the military regime had just cleared out from the Blue House.
Then the Berlin Wall came down, and when Kim started college in 1991, the Soviet Union collapsed.
“Superficially, my novels may appear autobiographical, a mix of political incident and love stories,” he says.
“But they’re not. I’m against novels that pretend to have an omniscient point of view but use the first person as a narrator.”
Kim’s latest novel investigates how a person is transformed between 1991 and 2007. The story reflects changes that have taken place in Korea during this period. He says the story is based on a relatively simple plot, but the narrative becomes increasingly complex.
“It’s naive to think that literature will eventually disappear,” Kim says, acknowledging that many commentators feel that novels and poetry are devalued in today’s society.
“Just because we have computers, movies and cable TV doesn’t mean that life will no longer be hard. Pain, despair and sadness will always be with us. That’s why literature plays such an important role in our lives.”
However, Kim says literature is increasingly narrowing down in terms of scope and subject. “Not enough novels are being produced by writers to ... meet the readers’ needs,” he said.