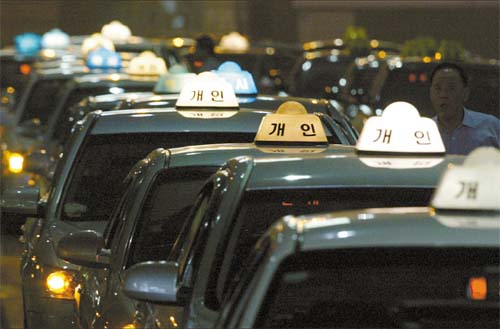 A call taxi owned by NaviCall. Provided by Seoul City

On Dec. 10, the Seoul Metropolitan Government introduced four new call-taxi firms.
The goal was to bring about a new taxi culture in Seoul.
Reforms are needed to provide safer taxi service following recent taxi crime (see above story).
Call taxis offer new services, including a card-paying system, notifying passengers and families of taxi location, offering passengers safety insurance, providing smoking or non-smoking taxis and female drivers.
Global Positioning Systems also allow call centers to keep track of where the taxi is located and if the taxi is vacant.
There are new policies regarding issues that most taxi passengers are concerned with - safety and convenience.
For female passengers who are afraid of crime, some 172 female drivers are allocated throughout the city.
There are also some 1,567 drivers who are trained to speak foreign languages, including English and Japanese, providing more convenience to foreign passengers.
But the system hasn’t been fully organized.
Jeong Do-hun, an official in charge of taxi policies from the Seoul City Government, said that there are no counselors at call centers who speak foreign languages as of yet.
For improvements, “We [the taxi team] are planning to create a liaison between call centers and tourist information centers for necessary translation services,” Jeong said.
“More improvements will be coming in 2008.” estyle@joongang.co.kr