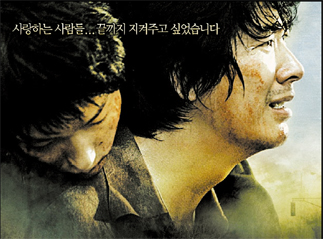 The Gwangju popular uprising and democracy movement in May 1980 marked a critical step toward deposing the military rule in Korea.
Yet it took years before the truth surfaced about what really happened during that turbulent summer in the former capital of South Jeolla.
The government covered up the event, and it has taken 27 years for the story to get the full cinematic treatment.
Filming “May 18,” director Kim Ji-hun was faced with a dilemma: how to make a heavy political subject entertaining and a box office draw.
Kim succeeds in part, but in order to deliver a commercially viable movie, he had to compromise on depiction of the carnage that occurred and add fictional human drama.
May 18 depicts how the democracy movement in 1980 was brutally crushed.
When students and citizens took to the streets on May 18 to demand the end of martial law, crack Korean paratroopers brutally suppressed the demonstrations.
Gwangju was isolated from the rest of the country and there was a media blackout.
Kim’s movie goes some way to convey the terror of the assault: The military is shown clubbing and shooting protestors in graphic, blood-soaked sequences.
But if you saw the legal hearings in the late 1980s and read official accounts of what took place, you’ll probably agree the bloodshed is watered down in the film.
In an age when moviemakers compete to create ever more ferocious cinematic butchery, I thought the sanitized violence in Kim’s movie, which got a 12-year + classification from the Korea Media Rating Board, took away some of the reality of what happened.
Perhaps the producers wanted to tone down the story out of respect for the victims and their families. But I suspect they wanted a 12-year classification to gain a bigger audience.
I’m not arguing that the film needs more bullets flying around to make it better.
But pregnant women were bayoneted on the streets of Gwangju during the uprising, a side to the story that Kim’s film shirks from telling.
The movie was well-cast. Veteran actor Ahn Sung-gi plays a retired officer from a paratrooper regiment who tries to mediate between the citizens and the military.
As an aside, the movie is called “Magnificent Vacation” in Korean, which was the code name for the operation.
May 18 stirred up controversy when it opened last summer. Retired military officers and former government officials threatened defamation suits, though none have been filed.
Clearly, 27 years on, any discussion of the event is still highly emotional.
The verdict: The movie offers a fair picture of what happened during that dark May. Like a documentary, it is indeed very educational for the young generation.
One scene is telling. Lee Yo-won, playing Ahn’s daughter, goes around the city telling citizens over a megaphone that their fight will not be forgotten. Probably aware that the rest of the country thought North Korean agents were at the heart of the uprsing, she screams, “Please remember us!”
That’s probably the main message in the film: Remember those who died.
The relationship between Ahn and his daughter encapsulates the human drama.
Ahn, a member of the military, tries to protect his daughter from being involved in the protests. It’s complete fiction, but their story captures the anguish that many families suffered.
I don’t know if more movies will be made about “5.18,” as the Gwangju Democratization Movement is commonly known in Korea, but Kim’s film will be the yardstick. The writers take liberties with the facts, but the fictional characters add to the drama. I won’t be surprised if the DVD sells well ― the movie made some $50 million at the box office. It’s family-friendly, a movie you can watch during the holidays.