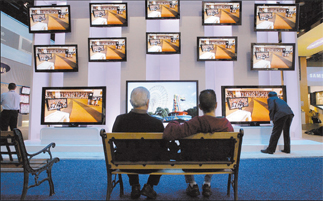 LAS VEGAS, Nevada ― Imagine a television that automatically blends in with its surroundings.
It’s not science fiction.
Samsung Electronics displayed such a device at the 41st Consumer Electronics Show here last Monday. The CES attracts electronic goods manufacturers from all over the world.
Samsung Electronics first displayed its liquid-crystal display television the “Bordeaux” here two years ago.
That year Samsung stood on top of the world’s flat panel television market.
The company’s ambitious follow- up to the Bordeaux is the TOC, or Touch of Color. The TOC’s frame changes color according to its surroundings. Its dark frame will lighten if it is situated in a bright environment.
The object is to ensure the television adds to the interior decoration of the home.
Additionally, Samsung Electronics presented a television that was designed by the world-renowned fashion house, Armani.
Park Jong-woo, chief executive of Samsung Electronics’ Digital Media department, said Samsung plans to become more than a market leader.
Its goal is to be the best-loved electronics goods company in the world.
Plans include the development of next-generation devices.
Once such product is the 3D PDP television, the ultra-slim LCD television, the Ultra HD television and the OLED television.
Park added that Samsung’s mission is to create digital products that are more user-friendly.
The target revenue for his digital media department this year is 3 trillion won ($3.19 billion), a 15 percent increase from last year’s global earnings.
The company last year sold 13 million units of its flat screen television, higher than the 11 million the company originally targeted.
This year the company has set its goal at 21 million: 18 million units of LCD and 3 million PDP units.
The global market forecast is that more than 200 million television units will be sold next year. 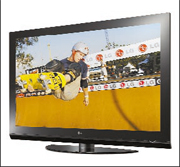 That’s because the United States and Europe are starting digital broadcasts, and the Beijing Olympics will boost sales.
Display Search, a digital product survey company, estimated that flat screen televisions such as LCD and PDP will account for more than half of the total global television sales.
That figure is expected to be approximately 190 million units.
LG Electronics, meanwhile, introduced a PDP television ― the PG60 series. It has a completely flat panel screen, the first in the world.
It won the Best of Innovation Award at the Las Vegas exhibition this year.
LG Electronics’ new LCD television, the LG60 series, has an ultra-slim design.
The television installed an intelligent sensor system, which adjusts brightness and color of the screen according to its surroundings. (The TOC only adjusts the frame color.)
Sony introduced its latest OLED television model at this year’s CES.
XEL-1, an 11-inch panel television, is as thin as three credit cards. It’s already on sale in the United States. Sony also introduced 17 of its latest 2008 LCD televisions, which include a 32-inch and a 38-inch high- definition television.
Panasonic exhibited its 50-inch PDP television, KURO. The television is only 9 millimeters thick and weighs 18.6 kilograms. The company also displayed a massive 150 inch PDP television.