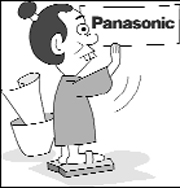 Japan’s Matsushita, one of the world’s largest home appliance companies, was founded in 1918 by Konosuke Matsushita. His father’s business failed, so he left school early and worked in furnace shops, bicycle shops and lightbulb shops for the following 10 years. After opening his own 6-square-meter (65-square-foot) electric appliance shop, he developed a two-way socket for lightbulbs, which became a major hit. That was the beginning of the giant Matsushita company.
Matsushita introduced seniority and lifetime employment, reasoning that if the labor turnover rate rose, it would damage the company. He initiated the trademark Japanese management style. That could be why he kept repeating, “Matsushita is a company that manufactures people while producing home appliances.”
Before he died of lung cancer in April 1989 at the age of 96, he had amassed more than 500 billion yen ($4.6 billion) in property. He had also earned the moniker “the god of management.” To Matsushita, more than money or honor, pride was the important thing.
In the late 1980s an executive suggested quietly to him, while he was in the hospital: “Matsushita and National are too old. Let’s unify the company’s names and brands with Panasonic.” Back then, the company’s name was Matsushita and its brand name was National. Panasonic was only used for export products and stereo equipment. Matsushita created the brand name National himself, with the subliminal message that it was essential for the Japanese people.
When he received the unexpected suggestion, Matsushita lost his words for a while as he shook in anger. The executive turned blue and left the hospital immediately. After that, the name of the company and its brand name were known to be sacred, even after Matushita’s death.
On Jan. 10, the CEO of Matsushita, Fumio Otsubo announced, “Celebrating the 90th anniversary of the company, we will change the company’s name from Matsushita to Panasonic and end the use of the National brand; all products will carry the Panasonic brand.”
That means global growth is more important than nostalgia or the founder’s name. The reason Matsushita’s world market share is only about 50 percent, much lower than Sony (70 percent) or Samsung Electronics (80 percent) is mostly due to brand dispersion.
With this, the myth of Matsushita, who provided a stepping stone for Japan to become a major economy, has ended.
Could Matsushita have imagined the Panasonic brand he created would eventually push out his name? Maybe this is why people say power does not last forever.