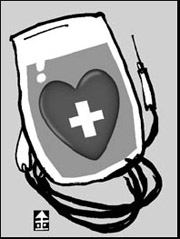 William Harvey is an English physician who discovered the true nature of the circulation of blood. He also discovered that the heart functions as a pump. He also realized, in 1628, the fact that blood circulates inside the human body. He rejected Galen’s theory, which had dominated medical theory for the previous 1,500 years. Claudius Galenus was a physician to the Roman Emperor Marcus Aurelius. He believed the liver produced blood, which sent it to the outer parts of the body to form flesh. He also said blood leaks out of the body in the form of human waste, such as sweat and urine. By a close shave, Harvey’s theory about “blood circulation” was formally recognized as an established theory, but it took another 190 years for a successful blood transfusion to occur. The British obstetrician James Blundell performed the first successful transfusion of blood to a patient to treat a hemorrhage. In 1818, He succeeded in saving a patient by transfusing 400cc of blood. At that time, blood transfusions were conducted with the artery of the blood donor directly linked to the patient’s vein to prevent the blood from solidifying.
Modern medicine, which has succeeded in developing an artificial heart, has not yet been able to create the perfect artificial blood. Artificial blood that carries oxygen produces serious side effects, such as high blood pressure. We cannot receive artificial blood which carries waste and immunity. People who need a blood transfusion have to anxiously wait for blood to be donated. However, blood only can be preserved three weeks, on average, and never more than 35 days.
Whenever winter comes, we are plagued by chronic blood shortages. Last year, students and soldiers accounted for 48.3 percent and 20.1 percent, respectively, of all blood donors. Whenever the vacation period comes, the blood shortages occur again.
The government authority for blood management announced recently that the current reserves of blood are below the standard, a seven-day supply. The supply of Type O blood is 1.7 days, and the overall average is 2.2 days.
The seriousness of the situation can be seen in the fact that Caesarean operations sometimes can not be conducted due to blood shortages. The Ministry of Health and Welfare is urgently devising a measure to temporarily remove the northern part of Gyeonggi and Gangwon provinces as government-protected areas against malaria every winter. The move was designed to encourage soldiers guarding the border to take part in blood donation.
What would be an alternative for solving the chronic blood shortage in this country?