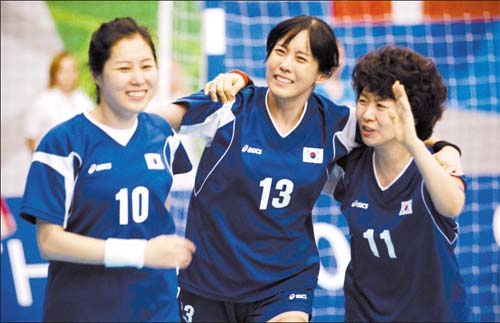 Mee-suk (Moon So-ri), a 34-year-old veteran handball player, wins a semi-professional handball tournament, but the same day she hears her team’s going to disband.
That’s bad enough, but it’s nothing compared to four years ago when she won a gold medal at the Barcelona Olympics in 1992.
When Mee-suk came back home proudly wearing her Olympic gold, the rest of the country seemed indifferent.
Handball had not captured the imagination of the country.
Mee-suk, starring in Yim Soon-rae’s film, “Forever the Moment,” which was released last Thursday, suffers even more setbacks. Her husband (Park Won-sang), a former handball player, runs away from debts brought on by a failed business, and Mee-suk starts working at a mall as a shop assistant.
Mee-suk’s life takes a turn when Hye-kyung (Kim Jung-eun) takes over as the newly appointed national handball coach for the 2004 Athens Olympics.
Hye-kyung persuades Mee-suk to come out of her retirement from the game and join the national team. Mee-suk agrees, only to find more tension when Hye-kyung gets ousted as coach. The younger team members dislike her coaching style.
Hye-kyung is replaced by Seung-pil (Eom Tae-woong), her ex-boyfriend.
Forever the Moment is based on the true story of the phenomenal story behind Korea’s women’s handball team.
After the indifference to their gold in 1992 in Barcelona, the entire nation was transfixed when the team took on Denmark in the 2004 final in Athens.
The game went down to a penalty shootout and the Danes held their nerve to win a famous victory.
According to the Korea Film Commission, 558,213 people have seen the film as of Monday, making it the most popular film in Korea right now. What makes for compulsive sports viewing also makes for compelling cinematic drama, it seems.
In 2004, most of the players were veterans in their early 30s. They were called the “ajumma squad,” or the housewife squad.
Despite the gold in Barcelona, the Korean team was pretty much the underdog. There were only five semi-professional women’s handball teams in Korea back then, and players made just 20,000 won ($21.34) a day. The team even had to enlist retired players since there weren’t enough players for the Olympics.
On the other hand, their rivals, Denmark, had 1,035 semi-professional teams.
To make the story more authentic, the four lead actors ― Moon, Kim Jung-eun, Kim Jee-young and Cho Eun-ji (the goalkeeper) ― undertook hardcore training.
They started last March, training at the Taereung Training Center and Helleniko Stadium in Athens, Greece.
They practiced for three months, four days a week, seven to eight hours a day. They began with basic physical training and graduated to dribbling, passing and shooting.
They even practiced difficult set plays.
One of Denmark’s players even appears in the film, and when the Danes visited Korea last June to play at an international semi-professional tournament, they helped in the filming at the Samsan World Gymnasium in Incheon.
“The film distinguishes itself from other sports dramas by bringing out the human story,” Yim pointed out.
“Conventional sports-related films usually focus more on the dynamics that games provide,” he said.
As coach, Eom also had to research his role thoroughly.
“I constantly asked [the real] Coach Lim for advice,” Eom wrote in the film’s press release.
“We [the crew and actors] went to many handball games so we could understand how the game works and how to move properly on the court,” Eom said.
Reality was intensified by the involvement of two genuine commentators ― KBS announcer Choi Seung-don and Coach Kang Jae-won.
During the 2004 finals, Choi and Kang said, “It’s a heroic battle between David and Goliath.” That struggle is captured in the film.