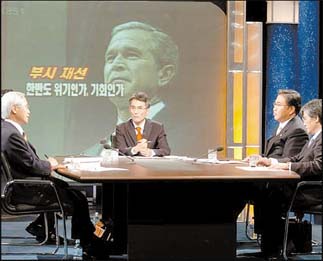 I accuse the TV show “Live: Midnight Debate” of making me schizophrenic. I both love and hate watching this late-night program. I often burst into laughter at the silly remarks the debaters make or talk to myself to curse the sickly smiles of the pigheaded politicians (sorry, politicians, but it’s my job as a reporter to be honest). I am sure that my poor neighbor must be agonizing about the person next door on the verge of insanity.
Still, I can’t help it. At the threshold of cheering in (or jeering at ― it’s our free choice) the new Lee Myung-bak government, these debate shows are enjoying a field day, inviting key policymakers and their opponents from the civil sector to discuss the policies for the next five years. All three mainstream TV networks have at least one TV debate show, which provide viewers with a chance to see key policymakers in their pure form.
I have to confess that there is a certain sadomasochistic fun in being a couch potato while watching politicians pant and stammer with anger and embarrassment when their logic is blocked by other debaters.
It is amazing to see how most politicians are driven into a corner as they lack the proper technique for healthy discussion. Am I being fair? Well, I just need a little more time to let go of the memory of the commotion at the National Assembly last month. As a human being with an average brain, it is hard to forget the politicians living on my (and your) taxes while scuffling, using electric saws, canes and telephones. One thing is clear: They agree not to agree.
The TV debate shows seem hardly any different. Of course, there are no physical melees and no hitting foreheads with telephones. Still, debate shows are broadcast live, revealing the raw aspect of a debate. A recent KBS-TV Midnight Debate, for example, was about the pros and cons of the plan to build a canal through the Korean Peninsula. I endured almost 90 minutes, listening carefully to what the debaters had to say. However, to my frustration, I still do not have any clear picture of what the canal could do.
And I was not the only one. The host of the show, Jeong Gwan-yong, had to stop the verbal sparring between the debaters. Agreeing to disagree, the debaters gave different premises and contradictory statistics. “I think the professor majored in civil engineering and construction like me, but maybe he is not such an expert,” said a Lee policymaker on the side of building the canal.
Another Lee adviser said he had already suggested what opponents had to say, only to be attacked by the opponents who denied the claim.
One of the key Lee backers, meanwhile, kept repeating, “Lee Myung-bak is different. He can do it.”
Debaters from both camps did not present any adult level of sophistication, as they often used casual (if not vulgar) speech, audible grumbles and even evil smiles with virulent words aimed at each other.
Still, I took some pleasure in watching members of the studio audience who were fighting hard against drowsiness. One person in his late 20s stood out in particular. He looked like he had dozed off.
I felt sorry for him, as I am 99 percent sure I would be napping if I had to sit there and watch such a meaningless verbal battle. I love debates and controversy, but only when they are done with reasonable logic, vocabulary and syntax.
The only thing I am certain of after watching weeks of these debate shows is that I am not sure about the future of our politics.
But I don’t need to despair. We have managed so far, although we have had fighting politicians at the National Assembly.
As long as I have the right to catnap in front of politicians or give them their due criticism, I guess life won’t be so bad in the years to come.
sujiney@joongang.co.kr