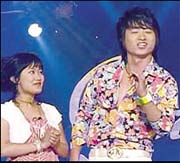 What do you get when two comedians go on a date?
This may sound like the beginning of a cheesy joke, but for comedian couple Yoo Sang-moo, 28, and Kim Jee-min, 24, this is reality.
The two first met while starring in KBS 2TV’s “Gag Concert,” a comedy show that airs every Sunday night.
They hosted a segment called “Lover” together, which kindled the initial spark.
YK Family, Yoo and Kim’s entertainment agency, said last Thursday, “The two have been dating for more than a year now.”
The Internet is full of rumor. “There was something fishy about the two,” said one netizen when the news broke.
“It was so obvious that they were in love. They were acting but their eyes glittered at each other,” said another.
Yoo made his debut in 2004 on KBS, starring in “Laugh,” “Gag Concert” and “Pokso Club.” Kim debuted two years later after being publicly recruited by KBS. She received an award for the Best Female Comedian in 2006.
Meanwhile, the couple is just one of many comedic lovebirds. These match-ups include Park Jun-hyung and Kim Jee-hye; Kim Jae-woo and Baek Bo-ram, who starred in SBS TV’s “Smile;” and Yoon Hyung-bin and Jung Kyung-mee, who worked together on Gag Concert.
By Lee Eun-joo