[Talk of town]Trot star vanishes without a trace

[Talk of town]Trot star vanishes without a trace 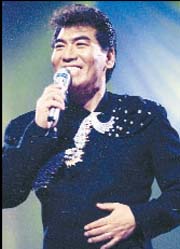 Is he being held hostage by Japanese gangsters? Or has a terminal illness befallen him? Or is he just sick of being tabloid fodder? The questions are flying in the air about veteran trot singer Na Hun-a’s whereabouts.
At age 61, Na, who debuted in 1966, has apparently disappeared. His hit songs include “The Wild Rose” and “Youth Carnival.”
At the beginning of 2007, Na withdrew from the public eye, canceling his concert slated for last March at the Sejong Center for the Performing Arts. He even closed down offices of his agency, Ara Event, located near Mount Nam.
However, rumors about Na’s whereabouts have surfaced. Sources say he may be planning a comeback. Others claim to have witnessed Na buying clothes and visiting a hotel sauna near Mount Nam. Still other informants say they’ve seen Na in the United States, Japan and Hong Kong.
In response to the rumors, people close to Na, such as his friends or his entertainment manager at Ara Event, are avoiding contact with the media.
Until Na resurfaces in public and makes his prior whereabouts clear, rumors will remain mere rumors.
By Lee Eun-joo