Despair when a child goes missing

Despair when a child goes missing 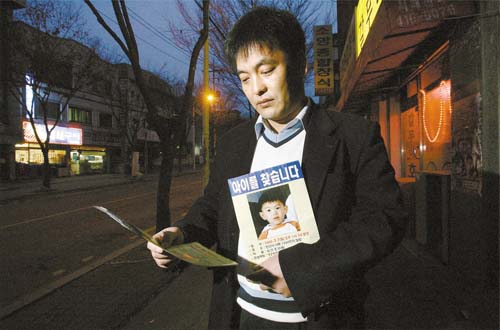 Choi Myeong-gyu clutches a picture of his son, Jin-ho, who has been missing since 2000. By Kim Hyon-dong

The bitterly cold wind stabbed at our faces as Choi Myeong-gyu, 41, lit up in an outdoor smoking lounge at the back of the Ansan Police Precinct in Gyeonggi.
“Sorry, I don’t even have an office,” said Choi, head of the Gyeonggi branch of the Korea Association of Missing Child’s Rights, a support group of parents whose children are missing.
Choi’s cigarette glowed as he inhaled. “I can’t afford to run an office,” he said, adding that his phone was disconnected because he couldn’t pay the bill.
Earlier in the day Choi had tried to contact the parents of two girls who went missing Christmas Day last year in Anyang. Both sets of parents refused to talk to Choi or the press.
“I know the pain those parents are going through right now,” Choi said. “They are just too devastated to meet anyone. I know because I’ve been there myself.”
Choi lost his five-year-old son, Jin-ho, eight years ago.
A nationwide search for Lee Hae-jin, 10, and Woo Ye-seul, 8, has met with no success since Dec. 25.
“Every day a team of 500 policemen and 70 detectives work from 9 in the morning until midnight looking for the two girls,” said Kim Byeong-rok, the Anyang detective in charge of the case, over the phone last week. “As of now more than 6,500 police have been involved.”
The detective said he, too, hasn’t been home much since he took charge.
The two girls were reported missing at 20 minutes past midnight on Dec. 26. The police began their inquiries by interviewing neighbors and searching for evidence.
“We sent out files nationwide and had police officers comb the area for clues,” Kim added. “The last time they [the two missing girls] were caught on a street camera was around 3 p.m. An acquaintance of the families saw them around 5 p.m. near the Anyang Arts Center.
“We have no leads on where they are now.”
No ransom calls have been made and there’s no evidence indicating that the girls were kidnapped. “The biggest obstacle in our investigation is securing witnesses,” said Kim. He couldn’t give further details about the investigation.
The police have raised the reward for any information regarding the two girls’ whereabouts from 20 million won ($21,340) to 30 million won.
The case of the two missing children from Anyang reminds people of what happened in Daegu on March 26, 1991. Five boys between the ages of 9 and 13 went missing after they left their homes around 8 a.m. They were believed to have traveled to nearby Mount Waryong to catch frogs. The boys were referred to as the “gaeguri sonyeon,” or the “frog boys.” 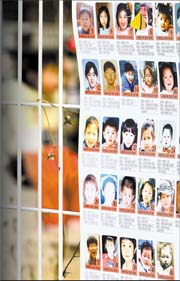 A nationwide search involving thousands of police officers got underway. They took 325 calls in 1991, 97 in 1992 and 131 calls in 1993.
None provided any leads.
The remains of four of the boys were found on Sept. 26, 2002, on the grounds of a high school in Dalseo, Daegu. Five pairs of shoes were also discovered.
Forensic scientists concluded that the boys were murdered. They’d each suffered extensive head injuries. They were given a joint funeral at Kyungpook National University Hospital on March 26, 2004.
The case’s statute of limitation expired in 2006 and the killer, or killers, have never been found.
According to a report released by the National Police Agency in August 2007, 7,064 children went missing in 2006, a 160 percent surge from the 2,695 the previous year. Out of the 7,033, 31 remain missing.
The increase is due to data collection. Before last year, the data only accounted for kids eight years old or under. The law was revised and as of 2007, the figure includes kids 14 years old or under.
The success rate in finding children is impressive. In 2005, all children reported missing were found, and in 2004 only one was left unfound.
However, these figures do not include children with physical or mental disabilities who are reported missing.
In 2006, 10,406 adults were reported missing and only 10,273 were found. That figure, however, includes adults with disabilities. Statistics for 2007 will be released by the agency later this month.
According to the National Center for Missing Children, which is commissioned by the Ministry of Health and Welfare, as of November last year 8,059 non-disabled missing children were reported missing, 7,994 of whom were returned to their families.
The number of missing children and adults with disabilities during the same period was 6,564, of whom 6,462 were found.
Park Eun-sook, of the National Center for Missing Children, said since 2005, when the newly revised missing children law was enacted, 99 percent of cases have been solved.
“The system has become more efficient and we have helped return children back to their homes as quickly as possible,” Park said. “Cases like the missing Anyang children are rare.”
The revised law has also provided benefits for parents of missing children, Park explained. The government provides 3.5 million won a year for professional counseling ― divorce among parents with a missing child is high ― plus 1 million won a year for medical payments.
In addition, there are transportation and food costs when parents go in search of their kids. This is called an activity payment. These payments differ from region to region. 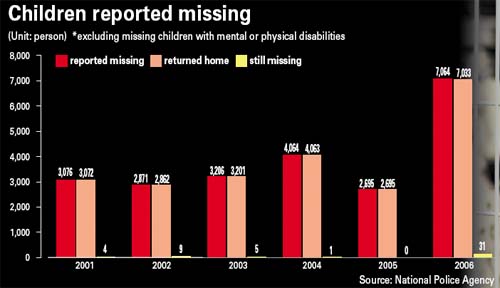