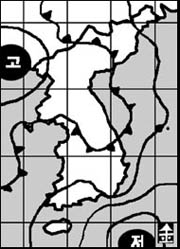 In 1909, the chief of the U.S. National Weather Service predicted the weather would be fine for the inauguration of the 27th president, William Taft. But heavy snow fell, ruining the inauguration ceremony. The chief had to resign because of his prediction.
In 2001, another famous weather expert, this time a Brazilian, was ashamed. He predicted downpours and even hail at Copacabana beach in Rio de Janeiro on Dec. 31, the night of their famous New Year’s Eve festival. The city, however, saw a crystal-clear sky. Its furious mayor sued the expert on the grounds that he financially damaged the city by pushing people away.
Weather, and the stock market, are two of the most difficult areas to predict. That is because of the so-called chaos theory. Chaos theory makes mid- to long-term predictions impossible, although an explicit theory of predictions exists.
The gist of the theory is the “butterfly effect,” which refers to a small difference in a decision which, over time, can have a tremendous effect on other things.
The term originates from the title of an article written by Edward Lorenz, an MIT meteorologist, in 1979. The title reads “Predictability: Does the flap of a butterfly’s wings in Brazil set off a tornado in Texas?” The article mathematically expounded that the flap of a butterfly’s wings can cause a subtle change in the atmospheric movement. In two weeks, the weather of the entire globe could change decisively.
However, the butterfly effect needs to be overcome to produce long-term predictions. Even the field of chaos allows short-term predictions. Meteorology, as of late, has nearly precisely predicted the weather for the past three days. Mind you, though, that is usually what happens in developed countries. Unfortunately, the Korean weather bureau cannot even predict the weather one day in the future.
People angrily criticize their forecasts, calling them live reports rather than predictions.
You may want to reference the great King Sejong. The annals of Sejong record that an official was punished because he predicted a solar eclipse 15 minutes wrong. At that time, a solar eclipse was seen as a divine warning and kings had to conduct a ritual to ask for mercy from heaven. In the end, however, King Sejong believed the incorrect prediction was not due to the individual official, so he ordered an improvement in the facilities for weather prediction.
If you want to blame Korea’s weather bureau, you may have to hold off until you provide the bureau state-of-the art meteorology facilities.