All aboard for flight to Pan’s Neverland

All aboard for flight to Pan’s Neverland 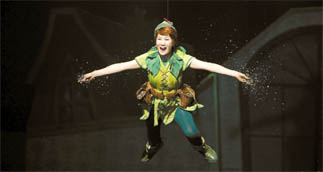 Moon Hye-young as Peter Pan. Provided by the organizer

Now that it’s 2008, many of you may be worrying that you’re now one year older. But don’t fret. Seoul Musical Company invites you to Neverland, a fictional island in “Peter Pan,” where eternal childhood prevails.
The musical Peter Pan is currently running at the Universal Arts Center in Gwangjin District, northeastern Seoul. The show runs until Jan. 20.
The family musical owes its creativity to Peter Foy, the founder of Flying By Foy Company, which specializes in flying on stage.
Foy, a specialist in stage flight, developed his own system for flying in the air called the “Inter-Related Pendulum.”
The technique was first showcased in Peter Pan half a century ago in New York.
“It is the first time that the Foy Company’s traditional flying technique will be showcased in a Korean theater,” said Park Young-suh, the PR manager.
The flying techniques allow Peter Pan and other characters to swoop around the theater.
The musical actress Moon Hye-young, who stars as Peter Pan, is one of the soaring players.
In the story, Moon, who has appeared in “Aida” and “Hard Rock Cafe,” battles Kim Min-soo, playing Captain Hook, to defend Neverland. Kim appeared in “The Last Empress” and “42nd Street.”
Choi Yun-jung from the rock musical “Line 1” and “Yoduk Story” stars as Wendy, whose house is in Neverwood, where the Peter Pan adventures take place. The plot is based on the original Peter Pan story but there is a twist ― Kang Bo-ram, the scriptwriter, inserted elements from “The Little Mermaid,” the Disney fairy tale, with characters such as the Sea Witch.