Here and queer in a changing society

Here and queer in a changing society 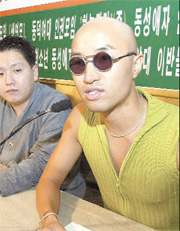 When an actor came out publicly seven years ago to say he was gay, the news hit Korean society with the force of a bombshell. It was unacceptable for someone to make such an announcement in a country deeply rooted in gender roles defined by Confucian values.
But things have changed since then, said Hong Seok-chun with a grin. “I feel very comfortable now walking the streets.”
The changes that the 38-year-old actor is referring to are not necessarily tangible, but they are undeniable. They’ve penetrated the most conservative elements of society, even the military.
The main theme in last year’s MBC TV drama “Coffee Prince Branch No. 1” was homosexuality and the show earned high ratings; KBS aired a TV drama about bisexuality earlier this month.
Nowadays finding online or offline communities for gays in Korea is easy. Even Seoul National University, whose graduates dominate influential positions in society, especially the government, has its own organization for gays. It’s called Q.I.S., which stands for Queer In SNU.
Yonsei University, which was begun by Christian missionaries, accepted its first student organization for sexual minorities, “Come Together,” last October.
Hong himself has seen his workload increase in recent years.
After coming out, job offers dried up and he didn’t work at all for three years. But recently he has started getting work again. He appeared in the movie “Puzzle” in 2006 and this year he is slated for a role in an MBC TV drama that is to air this winter.
This upcoming role also marks a significant shift in the kinds of roles that directors ask him to play. He’s been typecast in the past ― playing hairdressers.
A recent incident at a local university also indicated that change is in the air.
Hong was invited last year to give a lecture at Yonsei University. “After I was done, this kid came out in front of his friends and the whole audience,” said Hong. “Can you imagine that? That wouldn’t have happened five years ago. Not a chance.”
Changes in attitude had spurred gays to adopt a more proactive approach in making their case for better rights and equality. Hong participated in an annual gay parade last year, which was held for the first time at Cheonggye Stream in downtown Seoul.
Now in its eighth year, the parade attracted 500 people, double the number that joined the first parades, which were held around university areas, Jongno in central Seoul and Itaewon. 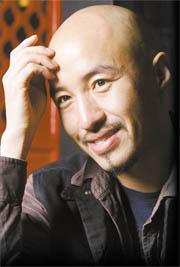 The actor Hong Seok-chun announced in 2000 that he was gay, spotlighting gay issues facing Korea. By Kang Wook-hyun

Han Chae-yun, a lesbian who organized this year’s event, said moving to the Cheonggye Stream put extra strain on the organizers.
“At Jongno, we could only get one traffic lane, so we thought we should move to where we can interact better with citizens and be more visible,” she said. “We were worried because we didn’t know what to expect, but I think it was a good move.”
Yun Ga-hyun, a professor of psychology at Chonnam National University, will publish a paper next year discussing changing attitudes to homosexuality in Korean society. Yun argues in his 1997 book, “The Psychology of Homosexuality,” that the problem confronting gay people in Korea is that Koreans tend to have misguided perceptions about homosexuality and lack interest in learning about others.
“When I first set out to tackle the subject I found that I was also highly prejudiced. It took me a long time to get over my bias, which I did by trying to get to know others,” said Yun.
Ewha Womans University, a missionary school, originally planned to published Yun’s book, but canceled out of concern for its reputation, Yun explained.
“It has been more than 10 years since I wrote the book and the data I compiled tells me we can identify different opinions now,” said the professor.
More proof that Korea has become more open-minded was highlighted recently when the Defense Ministry, by far the most conservative institution in the country, invited Hong to speak to military officers at Army Headquarters in South Chungcheong.
Hong was asked to discuss how officers could handle soldiers under their command who are homosexual. It was the first time the military had asked for outside help on this issue.
“They told me they wanted to solve the problem but they didn’t know how,” said Hong. His advice was to treat gay soldiers no differently from others, and he asked that measures to prevent hazing were needed and that soldiers had to be educated to prevent homophobia.
Nevertheless, homosexuality in Korea doesn’t enjoy the same level of acceptance as it does in the United States or Europe. In those countries, the issue has been publicly debated for much longer. But in Korea, there are still many signs that point to the old social order.
The same ministry that asked Hong for advice said last year it was considering measures in which officers above the noncommissioned level would be asked to leave the military if they were found to be gay.
“That is still an issue we are debating,” said Park Jae-sik, an official at the Defense Ministry. “But so far we’ve not had a case.” The ministry’s official position is that there are no gay officers, though the logic behind such a bold statement is far from assured.
“Nobody has come forward,” said the official, admitting that no survey had been conducted among the officer corps. 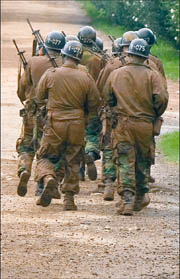 As for rank-and-file soldiers, a different rule is applied. They still have to serve their mandatory military service unless they are judged to be suffering mental illness caused by their sexual orientation or peer pressure.
The ministry established these guidelines in April 2006. The National Human Rights Commission of Korea asked the military to address this issue, which could no longer be ignored.
In the three years preceding the establishment of the guidelines, two soldiers have committed suicide while 25 soldiers were discharged in a three-year span leading up to early 2006, according to the Defense Ministry.
But Seo Mi-ran, an official of the commission, said changes were simply singling out gays in the military rather than helping them to simply serve like others.
She cites the case of a soldier in 2006 who told his commanding officer in confidence that he was a gay.
But shortly after, virtually his whole unit discovered his secret. As a result, the soldier, identified only as Kim, suffered verbal abuse from his fellow soldiers and had to be discharged.
The military tribunal evaluating his case asked for pictures showing sex acts as proof of his homosexuality and categorized the soldier as suffering from a mental illness. He was forced to undergo therapy and take an AIDS test without his consent.
“People still don’t know what it really means to be gay and they don’t know how to address the issue,” Seo said. “Homosexuality’s not a disease.”
She said there is a lot of work to be done to change the way the military thinks.
Hong also tells the story of a private in the army who called him last week seeking advice.
“I couldn’t meet him directly but this desperate guy told me he wanted to commit suicide because he felt he could do nothing here as a gay,” said Hong. “He was worried he would get nowhere in society.”
The soldier in question is under special supervision by his commander, the actor said.
Bae Jung-won, a human rights activist who has given advice to the military on sexual abuse and other sex-related issues since 2000, said six soldiers told her they were gay when she was visiting the Air Force last year.
“Conditions are better in the Air Force than in the Army. There is more room to assign soldiers to other units while most soldiers sleep in their own bed rather than with others in a single dormitory,” said Bae. “The biggest problem is when someone’s homosexuality is revealed by others without their consent.”
“That’s psychological lynching,” said the activist.

In the Korean military, officers are usually quartered in their own apartments, but soldiers sleep together in the barracks.
A defense ministry official who asked not to be named said there are double standards between enlisted men and officers because they have different roles and responsibilities.
“An officer has to lead troops and needs to have authority,” said the official.
“If you are a known homosexual and an officer, you might lose your authority. We cannot have that in an organization in which following orders without hesitation is absolutely crucial,” he said.
For Han Chae-yun such remarks are telling: “I’d say there have been some changes, but you can’t say things have gotten better.”