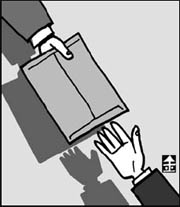 People often relate their past to rivers, and try to send their problems away into them.
In China, most rivers flow from west to east, because the geographically western territories are higher up than the eastern areas. Thus, when someone is suffering and wants to send his despair to the river, it is called throwing one’s pain into the eastbound current.
Just before the Song Dynasty was founded, the South Tang Dynasty, ruled by Prince Lee Wook, occupied southern China. Prince Lee was more of a genius poet than a feudal lord. The last verse of the poem Lee wrote when he was arrested and taken captive by the first emperor of the Song Dynasty ends by saying: “Allow me to ask, how much grief do you feel? It is as though the whole river flows to the east in the spring.”
In the spring the river runs east in full flood. The comparison of sorrow to a river in the spring is greatly appealing. It is a marvelous literary expression which captures both the extent of pain and the beauty of words.
Yet forgetting things by throwing them in the river has its limits. In practice, you should thoroughly review the past to make a better future. Jiang Kaishi of Taiwan and Deng Xiaoping of China ― the latter led China’s opening and reform policies ― both favored the same maxim: Inherit the past and prepare for the future. There are similar other maxims in China. They show the Chinese approach, which is to explore new ideas by fully understanding what one had inherited.
That approach is indeed practical. If you categorically reject the past, you gain very little. True practicality comes out of a detailed calculation of the cause and result of one’s action. In that regard, the presidential transition committee will likely fail in terms of its North Korea policy, although the committee says its goal is pragmatism.
The committee has decided to close the Ministry of Unification. Some fear that the decision was reached crudely, made only as a result of its past policies. Our North Korea policies during the past decade have produced many achievements despite several problems and failures. Those achievements are worth more than the roughly $10 billion in public funds spent in the past 10 years.
National unification and reconciliation are difficult yet important tasks for all of us. In other words, we need to think over and over again how grave the task is. One is bound to suspect whether the committee read through all the dossiers of North Korea policies in the preceeding administrations. The task would take at least two months. Practicality cannot be accomplished just by repeatedly uttering the word.