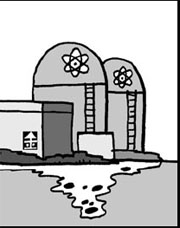 It was in 1942, three years before the first atomic bomb landed on Japan, that Enrico Fermi created the world’s first nuclear reactor and successfully created a nuclear chain reaction. In 1954, the first nuclear submarine, the Nautilus, set sail, and in 1955, the Calder Hall nuclear power station in the UK and the Shippingport station in the U.S. began operations, opening the age of nuclear energy.
The last 50 years saw a great leap in the growth of nuclear energy, although the industry has at times experienced accidents. The most representative of these were the meltdown of the Three Mile Island nuclear generation station in the United States in 1979 and the Chernobyl disaster in 1986. At the end of 2006, the number of nuclear reactors in the world has reached 429. Many countries are bringing renewed attention to nuclear power plants lately in order to prevent global warming and reduce greenhouse gases. The so-called renaissance of nuclear energy has arrived. Recently the British government approved the construction of a new nuclear power plant despite opposition from environmental organizations.
Domestically we have 20 nuclear power reactors and six more are to come. Korea was the 21st country in the world to have a nuclear power station, and now it is the sixth largest nuclear energy user in the world. The first Gori Nuclear Generating Station, with an estimated full capacity of 587,000 kilowatts, was the first commercial nuclear power station in Korea, established in April 1978. The Gori station was closed in June last year because it had reached its original life expectancy. However, the government reopened it after it was determined that its capacity had not worn out. Despite opposition, the Gori reactor passed the safety tests of the AEA, and residents eventually agreed to its renewed operation. The first Gori station launched its second phase of energy production on Jan. 17 this year, as its life expectancy extended 10 years. According to the organizational reform plan of the government announced by the transition committee on Jan. 16, nuclear power reactors will be managed by the proposed Ministry of Knowledge and Economy, whereas safety regulations on the power stations are to be handled by a new Ministry of Human Resources and Science. The division of responsibility reflects the argument among experts and the IAEA that separate institutions should run power plants and regulate their management. The current move to divide and check is welcome, considering that safety regulations will be strengthened in case we cannot help but extend the life expectancy of nuclear stations.

The writer is a reporter of JoongAng Ilbo specializing in environmental issues.