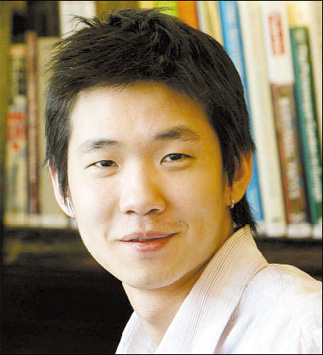 Pianist Lim Dong-hyuk, 24, will play Bach’s Goldberg variations next month.
Lim’s 12-city tour begins in Busan on Feb.14 and ends in Gwacheon, Gyeonggi, on March 7.
“When I first heard Glenn Gould playing the Goldberg variations, I just couldn’t stop saying, ‘Wow,’” Lim said.
“I thought if I could play like that, I wouldn’t have any more ambitions. Then I just began immersing myself in the variations day and night,” he added.
That’s how Lim said he got out of a slump that lasted from 2006 and 2007.
Lim was called a prodigy after winning the Concours International Marguerite Long-Jacques Thibaud in France in 2001 and coming second in the Hamamatsu International Piano Competition in Japan in 2000.
After he won third place at the Frederic Chopin International Piano Competition in Poland in December 2005, Lim received several invitations from different orchestras. But he said when he quit the piano for almost two years, these requests had to be turned down.
“I didn’t play the piano for a long time in 2006 and 2007,” he said. “I wasn’t enjoying the spotlight at all. People were recognizing me only as a pianist. Eventually I just lost direction. But since then I’ve learned how miserable it feels when nobody wants you.”
His new-found determination got him back to the stage. “Now I want to play the piano like crazy,” he said.
Lim’s recital will take place at 8 p.m. on Feb. 26 at Seoul Arts Center.