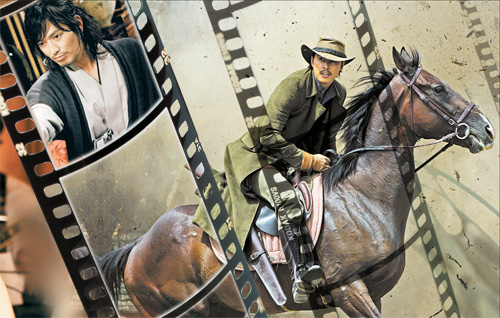 Far left: Jeong Jae-yeong in “Shingijeon,” and above, Jung Woo-sung in “The Good, the Bad and the Weird.” [JoongAng Ilbo] 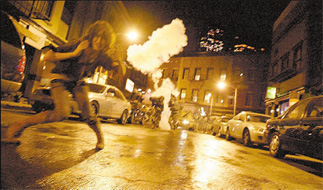 Cloverfield
“Lost” director J.J. Abrams, who has notched up a number of credits, including “Mission Impossible III” and “Armageddon,” takes us on a monster romp through New York City.
A bunch of Manhattan yuppies throw a pal a party, but a gargantuan reptile tries to gatecrash. Total mayhem ensues with lots of people running around screaming in scenes of anguish and despair.
In fact, it’s pretty much the Korean hit “The Host” meets the U.S. sitcom “Friends.”
The movie opens in theaters on Jan. 24 and cine-enthusiasts suffering from attention deficit disorder will note the fact that the movie lasts a brief 85 minutes.
Rather like the 79-minute scuba-tragedy “Open Water” in 2003, the tension is drawn out without overindulgence.

Evangelion: 1.0 You Are (Not) Alone
Anime obsessives and fans of “Evangelion” in particular, will be lining up overnight to get tickets for this new movie from Hideaki Anno, the animator behind “Neon Genesis Evangelion.”
Based on the original acclaimed anime TV series, it is the first of four films to be released in the Rebuild of Evangelion tetralogy.
Teenager Shinji Ikari gets trapped between the battling UN army and the fourth Angel, Sachiel, in Tokyo-3.
He’d been summoned by his dad, Gendo. Lt. Col. Misato Katsuragi rescues Shinji and the young lad is pressured into becoming a fighter pilot with EVA Unit 01. Tokyo-3 is under attack from the Angels.
The film, rather like the “Lord of the Rings” franchise is built around a complex series of myths and philosophies inspired by aspects of Christian, Buddhist and Japanese mythologies.
The animation will open in local theaters on Jan. 24, and stars Megumi Ogata, Megumi Hayashibara and Kotono Mitsuishi

Alien vs. Predator: Requiem
You can probably guess the entire plot of this movie within the first five minutes. Spaceships crash-land in small-town America spilling alien facehuggers all over the countryside.
One by one, the residents of this Colorado town get picked off with plenty of gore and agonizing howling to keep teenage boys satisfied.
There’s nothing original about this film, but its predecessor “Alien vs. Predator” has grossed millions.
TV actors Reiko Aylesworth (“24,” “ER”) and Steven Pasquale (“Rescue Me”) star. The film opened in Korea last week.

Pride and Glory
This gritty New York tale sees two NYPD cops ― Edward Norton (“Fight Club,” “American History X”) and Colin Farrell (“Miami Vice,” “Alexander”) ― lock horns over a scandal that threatens to tear the lid off police corruption and skullduggery.
The two stars are related through marriage ― it’s not a same-sex union, though that would be interesting ― and family loyalties smack headlong into cop codes of honor.
The director is Gavin O’Connor (“Tumbleweeds”) and the movie opens in March in Korea.

Indiana Jones and the Kingdom of the Crystal Skull
The plot is a closely guarded secret and all we know is that the film is set in the late 1950s. The character Indiana is a lot older, as is the actor, Harrison Ford.
Expect lots of jokes about Indie’s age and plenty of exotic locations. Apparently the film will retain the flavor of the previous Indiana Jones films ― the kind of B-movies director Steven Spielberg grew up watching.
The film also stars Cate Blanchett (“The Aviator,” “Babel”) and the young actor Shia LaBeouf.
The show is expected to open here on May 22.

Other releases coming to Korea: “Wanted,” “Iron Man,” “The Other Boleyn Girl,” “The Righteous Kill,” “The Incredible Hulk,” “The Love Guru,” “Batman Begins: The Dark Night,” and, of course, “Harry Potter and The Half-Blood Prince.”