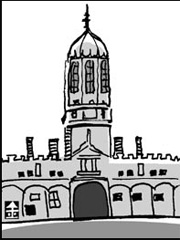 “If there is a hell, [Christopher] Hitchens will go there, due to this book.”
That was one comment on “The Missionary Position: Mother Teresa in Theory and Practice,” which was written by Christopher Hitchens, a British-American author, journalist and literary critic.
How could anybody write a book that debunks Mother Teresa and her Missionaries of Charity order?
Hitchens criticized Mother Teresa for her opposition to abortion.
“It is a weird thing that an old maid can cry out against abortion,” Hitchens wrote.
Hitchens used to be a Trotskyist and graduated from Oxford University.
Richard Dawkins, a professor at Oxford University, came to prominence with his books “The Selfish Gene” and “The God Delusion.”
He argues that the purpose of life is simply the means to preserve genes.
Dawkins, an outspoken anti-religionist and atheist, lent his weight to the issues surrounding social biology and evolution.
Oxford University has fallen behind Cambridge University in university ratings in some areas. However, Prince Philip, Queen Elizabeth II’s husband and Chancellor of Cambridge University, adopts a careful approach.
“We need to respect the other place, Oxford University,” he said.
He still yearns for Oxford’s self-regulating and innovative academic atmosphere.
Oxford has been at the forefront of academic debate in history, literature, theology, philosophy and science for the past nine centuries.
Oxford University is generous to socialists and atheists.
Numerous epoch-making controversies started at Oxford University.
At least one of its graduates has became successful in the field of fantasy novels.
A few days ago, Kim Soo-haeng, a professor of economics at Seoul National University, retired.
He expressed regret in an interview, saying, “My successor probably will be a major in modern economics, even though I taught Marxism.”
It seems as if rightists have swept over Korean academic circles, whereas the leftists have collapsed.
“Learning makes headway by undertaking severe controversies,” the philosopher Francis Bacon said.
Ravaged by inbreeding, the Korean university society seems to be headed for infertility.