New romantics are not so new but they sing on

New romantics are not so new but they sing on 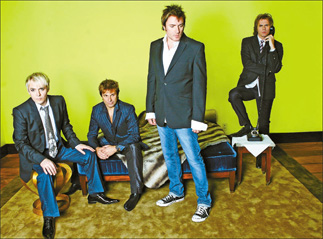 A familiar scene in 1980s Korea were the posters displayed in stationery stores near schools. Posters were of then star singers or actors like Jo Yong-pil and Lee Moon-sae.
But there were also some blond, pretty-faced English guys in a rock band called Duran Duran.
Female fans divided themselves into two camps. One argued that Simon Le Bon (vocal) was the best looking, while the other chose John Taylor (bass).
Korea wasn’t alone. The band was huge. Its polished electronic music was one of the defining sounds of the decade.
The band surfed into the music scene on the back of the New Romantics, a rock genre that grew out of the bleak landscape of punk at the end of the 1970s. Their contemporaries included Simple Minds, Spandau Ballet and The Human League.
Despite some discord, Duran Duran lives on and celebrates its 30th anniversary this year.
The band released its 12th studio album, “Red Carpet Massacre,” last month.
The JoongAng Ilbo had an e-mail interview with four band members: Le Bon, Taylor, Nick Rhodes (keyboards) and Roger Taylor (drums).
John Taylor revealed that Justin Timberlake and rapper Timbaland appear on their album.
Duran Duran had planned all along to work with Timbaland on the album.
“Then Justin called and said he’d like to work on the album, too,” John Taylor said. Timberlake was already a fan of Duran Duran. One of his favorite tracks is “Ordinary World” from 1993.
Duran Duran, with help from Timbaland and Timberlake, worked on three songs: “Nite Runner,” “Falling Down” and “Zoom In” at a studio in New York last September.
Timbaland and Timberlake added a new dynamic.
“He’s the best of the best and yet keeps challenging himself for something new,” the bassist said of Timbaland’s passion.
But the collaboration wasn’t easy. Timbaland as a producer was keen to create a perfect sound from the start.
But Duran Duran tended to create sound gradually. They eventually settled on a combination of the two. “We learned stuff we wouldn’t have been able to learn as a band,” Taylor said.
The album has special meanings to each member, especially Le Bon. He wrote one of the group’s singles, “Falling Down,” about his motorbike accident in 1992.
“But before I hit the ground, is there time?/ Could I find someone out there to help me?” he sings in the song.
“Everyone faces struggles in life,” Le Bon said. “But with will, there is nothing that cannot be overcome.” The song is a take on his own failures and the band’s set-backs, he said.
After producing the original soundtrack for the 1985 James Bond movie, “A View to a Kill,” the group faced personnel problems.
Roger Taylor and Andy Taylor dropped out in 1986, leaving only three in the group, and Duran Duran’s popularity declined.
But 1993 was a turning point. They released what became known as the “Wedding Album,” and in 2004 came the “Astronaut” album.
A Duran Duran fan once said that the group’s music is like the key to an imaginary empire where young people dream of freedom and possibilities.
“If musicians and performers stop dreaming, it’s the end of freedom, possibility and hope,” Roger Taylor said.
Duran Duran is still dreaming and they will be marking its 30th year in the music industry with a tour.
“Music should be treated with a pure heart and sincerity. Then only will music contain life and force,” Roger Taylor said.
Sadly for Duran Duran fans in Korea, there are no plans as of yet to come to Seoul. But die-hard fans can still dream of future tours.