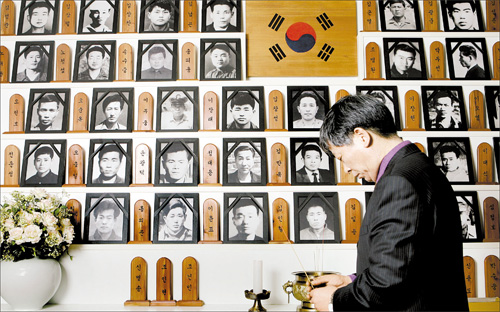 Ha Tae-jun, a former agent trained specifically for clandestine missions in the North, pays his respects to fallen comrades at a shrine located at an office in Itaewon. By Kang Uk-hyun

Former South Korean agents and commandos trained specifically to infiltrate North Korea took to the streets seven years ago.
They wanted recognition for the harsh treatment that they received during their training, claiming that they had been promised compensation, which they never received.
For a government that was trying to mend ties with Pyongyang, the publicity that these agents received was embarrassing. In addition, the agents threatened to reveal the scope of missions to the North, which had supposedly ceased after 1974. The two Koreas had signed a pact vowing to halt all clandestine operations in a bid to reduce tensions on the peninsula.
After the violent street protests, the government yielded and established a special law in January 2004, which provided guidelines for compensating the former agents.
Yet, to this day, some of the former agents are still waiting for their payday while others have filed lawsuits against the government. According to the agents, legal barriers and a passive government attitude have slowed down the compensation process in what some agents believe is a deliberate attempt to bury the past. 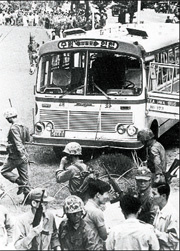 South Korean military officials in the aftermath of a 1971 incident in which South Korean agents were killed in a standoff with the government after they were told their unit would be disbanded.

What angers them most is that the government still has not publicly identified the agents or notified remaining family members eligible for compensation.
“It's not a proactive approach,” says Ha Tae-jun, the president of one of the several groups formed by the former agents. “Some of these people don’t even know that there is now a legal way to get compensation. The government needs to contact them and tell them that there is money available.”
Under the law, former agents are entitled to receive a lump sum ranging from 80 million won ($ 84,000) to 280 million won. They are also entitled to job training, education and medical benefits. A special committee located in Seocho District, in southern Seoul, handles compensation issues.
An added obstacle is that the deadline to file a claim that expired in October 2007. Bae Ki-cheol, an official working for the committee, says the committee is still accepting claims, but the National Assembly would have to grant another extension before payout.
There are also limited funds, Bae says, which means the committee has had to devise a pecking order. “The aging former agents are on top of the list. We process about a 1,000 claims per year,” says Bae.
Out of 6,900 claims received so far, 2,976 have been cleared, he says.
The committee gets about 100 billion won from the government each year for payout purposes. The government says 14,000 agents officially conducted missions in the North, or were trained for such purposes, between 1951 and 2002. By 1994, 7,987 had been confirmed dead, yet so far only about 350 official notifications have been issued to families.
Major Cheong Jin-suk, an official from the Defense Intelligence Command, says this is because it is hard identifying the agents’ families.
But Ha doesn’t think the math adds up. He argues the government is withholding vital information that could give remaining family members or surviving former agents some compensation.
“The committee is comprised of ex-military and they want to keep their jobs. So they’re just dragging their feet,” Ha says.
Major Lee Sang-yong of the Defense Intelligence Command, who trained agents, says there’s no conspiracy theory related to financial compensation. “A lot of times we only have a name and a birthday to go on,” Lee says, adding that the military asked the Home Affairs Ministry in 2002 to match the list of agents with current citizens, but failed to identify the majority.
“What we got was only information on 100 confirmed families and former agents,” Lee says.
Many agents originated from the North, so there is no-one left to contact, while a chronic lack of manpower and resources adds to the problem, Lee continues.
Meanwhile, Ha says the military is not being honest. He points out that some family members when contacted by third parties were asked for a “finder’s fee.”
“Without inside help this is impossible. The information on the agents’ families is only available to the military organizations or institutes that recruited them. That information is classified,” Ha says. His argument is that only agents recruited in the 1950s and 1960s came from the North, while the rest ― about 3,000 to 4,000 ― should be identifiable. “They always checked family information when recruiting someone,” Ha says.
Lee Yong-goo, 71, is the brother of Lee Bong-gu, an agent who served from 1964 to 1966 but died two years later. He says people claiming to be his brother’s former unit members visited his family in February 2007.
The men asked Lee to sign an agreement that once Lee received payment for his brother, they would get a 25 percent cut.
“The government is not looking for these agents or their remaining family members unless they come forward,” Ha says. “So who are these people? Even if you served with someone, finding their families after 30 or 40 years is impossible for an individual.”
Lee Cheol-woo, the son of Lee Yong-goo, filed a claim last June with the committee in Seocho, but found that a third party had already done so.
“I told the committee to ignore [the claim] since it hadn’t been filed by family. Now I’m waiting, but they told me it’s going to take two years,” Lee says. 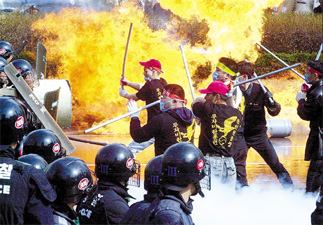 Former agents battle riot police in 2002 as they demand compensation from the government. [JoongAng Ilbo]

The committee screens every case thoroughly, which delays payouts, Bae says. “We have about 100 false claims a year to deal with.”
An incident last year further angered the former agents. Park Hyeong-tae, a former lieutenant colonel in the Defense Intelligence Command, was charged with embezzlement. While working at the committee, with the help of four other officials at the Defense Ministry, Park helped himself to 1.15 billion won. A military court sentenced him to four years in prison earlier this month.
Ha, who worked as an agent from 1984 to 1986, concedes that the clandestine and solitary nature of the work makes it hard to identify former agents. “It’s easier for the military. They operated in units so they have comrades with whom they can piece together the picture and come forward,” Ha says. “If they die, no-one knows. If they’re alive, they find out through the media that they are entitled to compensation. But some are living in the dark.”
The agents, collectively known as bugpagongjakwon (agents sent to the North), are split into two groups. Some operated in teams of four to six; the others conducted missions alone. They were drawn from the Air Force’s Office of Special Investigation, the Navy’s Underwater Demolition Unit and the Army’s Headquarter of Intelligence Unit.
The Defense Security Command, Defense Intelligence Command and Korean Central Intelligence Agency (now the National Intelligence Service) had their own agents, too.
Former agent Mok Yeom-gi, 51, served from 1968 to 1970. The committee turned down his initial demand for compensation. He went to court in 2006 and won his case last November. “I have served my country but I feel betrayed. They used me and abandoned me like a toothbrush,” Mok says.
In the case of Ahn Myeong-ok, 45, the committee wanted to reduce his payout. Ahn served in a commando unit from 1981 to December 1983, but he said he was forced to serve again for two more years after his discharge, this time as a solo agent. His second stint ended in April 1986.
Ahn is demanding compensation for both tours of duty, but the military wanted to pay for just the one. Ahn had agreed to serve longterm, the military said.
“My body is aching every night and this is what I get? I could kill someone for this. That’s how mad I am,” Ahn says. He estimates that only a handful of people served both in the commando units and later operated as single agents.
Those who have witnessed how the agents emerged from the shadows and fought for their rights attribute many of the prevailing problems to the very nature of the work. “Those missions are still classified and nobody should know about them. There are people who will get hurt so people are trying to move on as if nothing has happened,” says Kim Sung-ho, a former lawmaker who was the driving force behind the establishment of the special law.
Kim remembers that military intelligence was the main force in opposing any move that would shed further light. “The main argument was that by establishing a law we would officially acknowledge that we have sent spies and commandos to the North, something that no country does and Pyongyang has not done, either,” Kim says.
The former lawmaker said the Defense Ministry gave in after pressure from the Blue House.
Talk to the military, and it seems the atmosphere has not changed much. “I have raised the issue with my superiors, but the answer is always the same. They ask why I want to create such a fuss,” Major Lee says. “It’s not right but you kick it up the ladder and nobody really cares.”
Typical training for the agents included sabotage techniques, assassination and kidnapping. They were not allowed to contact anyone or leave base except for missions.
Beatings were commonplace, sometimes ending in deaths. Those who tried to escape were isolated, beaten and confined for weeks on minimal rations. Some found it hard to adjust after their discharge and joined the French Foreign Legion.
Agents under the Defense Intelligence Command were also used in the 1980s to undermine opposition party politicians. Agents are alleged to have taken documents from Kim Young-sam’s house in November 1985.
The Defense Intelligence Command still recruits agents, but in a more open way. Officially these people volunteer as “non-commissioned officers for special missions of the DIC,” but they are separate from the Marines and regular special forces troops.
Nobody tells them they might get sent to the North.