Fall in love all over again with some golden oldies

Fall in love all over again with some golden oldies 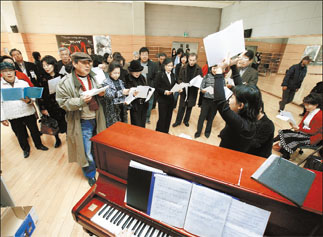 It is never too late to sing or dance onstage - even if you’re over 60. If you want proof, buy a ticket to “Love,” a musical that opens at the Sejong Center for the Performing Arts in central Seoul on Feb. 1.
The average age of the cast is over 60, according to Acom International, the company organizing the show.
During auditions early last month at Chungmu Art Hall, some 147 aspirants tried out. Among them, 105 were over age 55.
The original, directed by Icelandic actor and producer Gisli Orn Gardarsson, was staged at The Reykjavik City Theatre last year. Gardarsson co-founded Vesturport, a theater company, and adapted, directed and starred in Franz Kafka’s “Metamorphosis” at the Lyric Theatre in Hammersmith, London.
Set in a retirement community, Love features characters who suffer from various maladies. Even so, the atmosphere isn’t all that gloomy. As the musical’s title suggests, it’s romantic. At the nursing home are Yoni (Kim Jin-tae), Nina (Jeon Yang-ja, Lee Joo-sil), Cindy (Seo Kwon-soo, Park Young-ok) and Omar (Jung Hyun). Though nearing the end of their lives, they’re still looking for everlasting love in the form of new lovers.
Love strikes Yoni upon first sight of Nina, and the elderly gentleman asks his new lady love out. But Nina’s son (Lee Bong-geun) is against her new flame, as he feels she is betraying her late husband.
Meanwhile, Omar gives Cindy flowers in hopes of winning her heart.
As for the numbers in this musical, expect to hear a whole lot of covers: The score includes The Beatles’ “Let It Be” and “Ob-la-di, Ob-la-da,” Nana Mouskuri’s “Only Love,” Bob Dylan’s “Forever Young,” ABBA’s “Thank You for the Music” and Joan Jett’s “I Love Rock & Roll.”
If you really fall in love with Love, plan a jaunt to London’s West End to see the original this May. 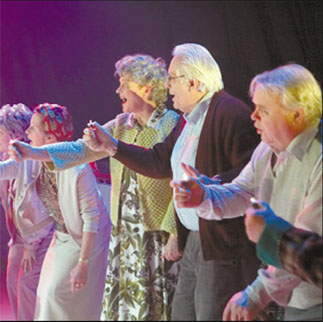 The original Icelandic cast. Provided by the organizers