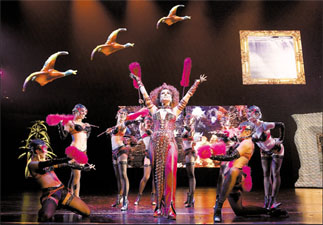 Killer Queen, guaranteed to blow your mind. Provided by Gsent

The late Freddie Mercury once sang, “Who wants to live forever?” Fans certainly wanted the vocalist and songwriter of the English heavy rock group Queen to live on.
He doesn’t, but his music does, and not just on greatest-hits CD compilations.
The musical “We Will Rock You,” based on the music of Queen, will be staged in Seoul next month. It will feature the original cast behind the hit West End production in London.
Audiences will be whisked back to the 1980s when Queen reigned supreme. Hits include “‘We Will Rock You,” “We Are The Champions,” “Don’t Stop Me Now,” and their anthem, “Bohemian Rhapsody.”
Queen’s guitarist Brian May and drummer Roger Taylor supervised the score. The British comedian Ben Elton, who worked on the “Mr. Bean” series starring Rowan Atkinson, wrote the script.
The musical made its debut in May 2002 at the Dominion Theater in London and has notched 2,000 performances so far at the London theater.
The Korean tour almost got canceled following the fire at the Seoul Arts Center during a performance of “La Boheme” last December.
Luckily the musical found a new stage at Seongnam Arts Center. Curtains open on Feb. 2 and the show runs through Feb. 24.
In the last six years, the musical has traveled to Melbourne and other parts of Australia, Barcelona, Madrid, Las Vegas, Moscow, Tokyo and Toronto.
It is the first time the musical has come to Korea.
Mig Ayesa, who played the role of Angel in the musical “Rent” in London’s West End in 2002, plays Galileo Figaro. Annie Crumer, who has been working with Warner Music since 1993, plays the Killer Queen. Sivan Raphaely plays Scaramouche, a part she played in an earlier Hazel Feldman production.
The story takes place 300 years in the future where life is dull: Everyone listens to the same music, thinks the same and rock music is all but dead.
Here the two heroes ― Galileo Figaro and Scaramouche ― resist the control of the corporate colossus, Globalsoft.
They go in search of a guitar that the legendary band Queen once hid.
Tickets range from 40,000 won ($42) to 150,000 won. The show starts at 8 p.m. during weekdays and 3 and 7: 30 p.m. on Wednesdays.
The musical will be staged during the Lunar New Year holiday from Feb. 6 though 8. However, on Feb. 14 and 21 there is an additional 3 p.m. show.
For reservations, visit www.interpark.com or call (02) 1588-4558.